Labour’s 2 point lead over the Conservatives disappeared during November and they now hold a very slight lead.  There is evidence of some voter movement towards UKIP which indicates that their true national level is around 4% or 5% and their General Election performance was distorted by so many of their candidates standing down.

Chart G1 shows the Conservatives have slipped back since the 2017 election and Labour now has a lead of less than 1% in Great Britain.  The most striking thing about G1 is the quite extraordinary recovery in the Labour vote from mid-April 2017 when the election was called.  Understanding why this happened is key to making sense of the 2017 election and what is likely to happen next.  I have to say that from what I have read from political commentators, no-one has yet made sense of this dramatic surge.  For myself, I keep coming back to a comment I made to my wife (who is American) that the election was starting to remind me of the Democrats primary battle in 2016 between Hillary Clinton and Bernie Sanders and I do feel that the two elections share a similar dynamic.  I have put down some initial thoughts in the Voter Switching section below. 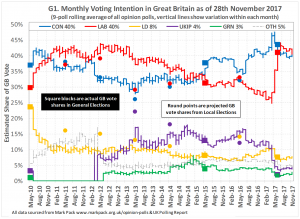 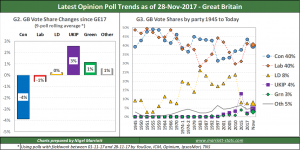 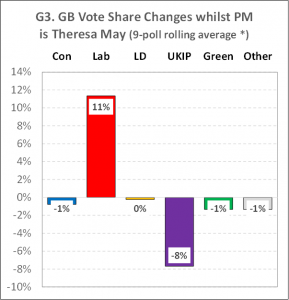 I will update this section with my usual slides in a later post but for now I have decided to include chart G3 which shows the change in GB vote shares since Theresa May became Prime Minister in mid-July 2016 and said “Brexit means Brexit”.  For all the apparent chaos in the Conservative party, their vote share is still where they were when she became PM which does raise the question of where they could be if all was going well.  Chart G1 shows that they reached a peak of 47% just after she called the General Election so it does seem that the current pessimism within the party is regret for what could have been rather than whether they made the wrong choice for party leader.

The difference in the political landscape since then is entirely due to the recovery of the Labour party under Jeremy Corbyn and chart G3 shows that this has mostly come at the expense of UKIP.  This raises the question, how did this come about?  I have attempted an answer with the table in chart G4.

In her first 9 months, the Conservatives were steady just above 40% whilst Labour leached voters to the Lib Dems.  At the same time, Labour was losing some voters to the Conservatives and there was also a slow drift from UKIP to the Conservatives which then accelerated when May called the election.  Over the next month during which local elections took place, Parliament backed the election call and the parties decided their manifestos and candidates, Labour began to recover due to their Lib Dem defectors returning to the fold plus some UKIP voters switching to Labour.  The UKIP to Labour switching was something I noticed at the time and I speculated that with UKIP choosing to stand down candidates as a way to not split the Conservative, this had the potential to backfire as in effect their voters were being told what to do which is always a dangerous thing to do in my opinion.

With the benefit of hindsight, the publication of the manifestos backfired considerably on the Conservatives and Theresa May especially and rejuvenated Labour.  The precise dynamic is still not clear to me, but it does look like that a combination of prior UKIP to Conservative & Labour to Conservative switchers then changed their minds and decided to vote Labour instead especially in the Midlands and the North which is where the polls got it so badly wrong and precisely where the Conservatives expected to gain seats.  Perhaps the thought process was “same old Tories” and an electorate looking for something different then became receptive to Jeremy Corbyn’s message.  But it still should not be overlooked that for all that, the Conservatives are still where they were when May became Prime Minister and the current Labour vote consists of many people who have flirted with all of the other parties especially UKIP.  Whilst I am making no prediction of the future, it is not beyond the realms of possibility for some future event to take place that could lead to a UKIP resurgence at the expense of Labour.

The 2017 General Election saw the elimination of class as a predictor of voting intentions but age become a more distinct differentiator between the parties.  I will keep an eye on demographics in the polls and at some point I will update this section.

After an entire meteorological year where the temperature above the median for ever single month, … END_OF_DOCUMENT_TOKEN_TO_BE_REPLACED

Sir Donald Bradman is the GOAT (Greatest of All Time) of sporting GOATs.  All cricket lovers accept … END_OF_DOCUMENT_TOKEN_TO_BE_REPLACED