This article assumes you are familiar with these terms

If not, I recommend you read these articles of mine which explain them in more depth.

Take a look at this fictional employer with 16 employees (8 men & 8 women) where the median woman earns 35p for every £1 earned by the median man.

It should be obvious that the reason for the large gap between the median man and median woman is because there are more women than men in the lower pay half (75% female) and more men than women in the upper pay half (75% men).

With that swap, there are now 4 men & 4 women in the lower pay half and 4 men & 4 women in the upper half.  Since we have an even number of men and women overall, the median man is the average of the two men standing in the middle of the male line (£25 & £40) and the median woman is the average of the two women standing in the middle of the female line (£30 & £35).  In this instance those averages turn out to be the same and the median gender pay gap has been eliminated.

The numbers of women and men that need to swap pay halves is the Gender Swap Number.

In the above example, I am defining it to be +2 to denote the fact that 2 women from the LOWER pay half needed to swap places with 2 men from the UPPER pay half to eliminate the median pay gap.

Important!  Ethnicity Swap Numbers or indeed Swap Numbers for any protected characteristic can be calculated in exactly the same way.  The +2 calculated here could have easily been the number of purple employees that need to swap places with green employees.  What I have written here can be added to my 7 Recommendations for Ethnicity Pay Gap Reporting.

There are many names I could have used for this concept (and I am open to suggestions) but for now, I’ve deliberately chosen the word Swap to focus on the key point that men and women have to swap places by pay halves to close a pay gap.  99% of the time, this does not involve real human beings swapping jobs e.g. male managers becoming male secretaries, female secretaries becoming female managers, it will happen by the respective men and women leaving the company or being promoted (or demoted) and the respective vacancies being filled by a person of the opposite gender.

Does a Gender Swap Number of 0 mean there is no gender pay gap?

Most of the time the answer is yes but occasionally there can still be a median gender pay gap.  However, such pay gaps would be purely statistical ones due to random chance and are not indications of a genuine median pay gap.  The following example shows a man and women swapping places in the lower pay half leading to an artificial median pay gap which is not meaningful.

Does a Gender Pay Gap of 0 mean the Gender Swap Number is also 0?

Most of the time the answer is yes but there is one situation when it is not the case which is common among minimum wage employers.  The following example shows an employer with 7 women &  9 men who pays 12 out of 16 employees the same rate of £10 per hour.  The median man is paid the same as the median woman but the Gender Swap Number is not zero but +1.

In such employers, the median gender pay gap is misleading since when we look at the upper pay quarter, we see 1 woman and 3 men with the two highest paid employees being men.  This is a situation where the mean gender pay gap is more meaningful than the median but you have to be able to recognise such situations as exceptions which is not always obvious to someone who is not a statistical thinker.  The Gender Swap Number overcomes this issue and gives a fairer picture than either the median or mean gender pay gap.

Let’s look back at my original example below where the median woman earns 35p for every £1 earned by the median man.

Now take a look at this example where the median woman earns 65p for every £1 earned by the median man.

What is the gender swap numbers for these two examples?  It’s +2 for both of them even though the median gender pay gaps are very different.  In other words, both employers have to do the same amount of work to eliminate their pay gaps but the effect of these interventions will be very different on the median pay gap.  The reason for the discrepancy is obvious, the pay scale is narrower for the second example compared to the first example.

I believe the purpose of gender pay gap reporting is to encourage employers to look at their own data and see why they have pay gaps.  They then need to identify how to close their pay gaps.  If two employers need to do the same amount of work to close a gap then I think it is unfair to compare their median pay gaps if these are also affected by the payscales used by the employers.  This is why I say Gender Swap Numbers are fairer to employers from the point of comparison.

How long will it take an employer to reduce their GSN to zero?

In other words, how long will it take an employer to genuinely, not artificially, eliminate their gender pay gap? 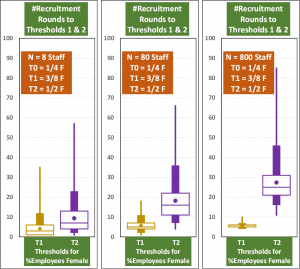 I answered this question in my article “Eliminate your pay gap by playing Blackjack” where I demonstrated that closing pay gaps takes longer than you think even if employers have 50:50 male:female candidate pools for vacancies & promotions and there is no discrimination at any point.  If you have not read this article, I strongly recommend you do so since the outcome as illustrated in these charts (explained in the article) is quite sobering and requires a distinct strategy in order to shorten the time to equality.

Should a gender swap number of zero be the goal?

In other words, women are less likely to found in the higher paid roles in the second example.  It is the pay fingerprint that highlights this.

So there you have it.  I hope you agree with me that Gender Swap Numbers are easy to calculate, easy to interpret, fairer to employers when making comparisons and also give a metric which can be used to track progress.

It was a warm and sunny March this year in the UK.  In fact it was the 2nd sunniest March on record. … END_OF_DOCUMENT_TOKEN_TO_BE_REPLACED