You are here: Home / Diversity / Pay Gaps #17 – How to Spot an Incorrect Median Gender Pay Gap

I have a spotted an incorrect median gender pay gap published by a well known name in a certain industry.  They shall remain nameless for now since I am trying to get them to accept their error and publish a new gender pay gap report on their website.  I know they have made an error because their published data violates the laws of mathematics as I will explain in this blog.  All it takes to spot such an error is a simple calculation you can do in your head and an understanding what the median measures.

I should state straightaway that Cleveland Police & other employers mentioned in this post are not the nameless employer I am referring to!

Are Cleveland Police correct to claim they have no gender pay gap? 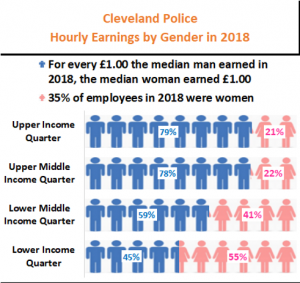 Here are the vital statistics for the Cleveland Police force in 2018 created from my free downloadable tool which has data for over 11,700 employers.  They state that for every £1 earned by the median man, the median woman also earns £1.  They also state that just over 20% of the two highest paying income quarters and just under a half of the two lowest paying income quarters are women.  Is it mathematically possible to have data like this?

Let’s remind ourselves of the definition of the median, quartiles and quarters.  In the graphic below, I have an employer with 7 men and 5 women who are standing in a line in order of their hourly earnings.  The line has been split into four equal sized groups of employees with 3 employees in each group which are called Income Quarters.

Median, Quartiles and Quarters are all subsets of a wider group of statistics known as Percentiles.  From left to right in the graphic above a number of percentiles are given their own name and the following 5 percentiles are the boundaries that surround and define the 4 Income Quarters.

Every employee can therefore be compared to these 5 boundaries to decide which income quarter they are in.  So a man earning £25 an hour lies between the median and the upper quartile and is in the upper middle income quarter.

How the laws of Mathematics work

I define the Gender Ratio Differential (GRaD) to be the difference between these two ratios i.e.

The median woman is the woman standing in the middle of the female only line (5 in all) when sorted by hourly earnings.  She is highlighted in the graphic above and is earning £15 per hour.  A negative GRaD for women tells us that a majority of women are in the bottom half of the overall income line.  That majority must include the median woman since by definition of the median, there are equal numbers of women on either side of her in the line.  To make up a majority, the median woman has to be part of that majority and consequently she ends up in the bottom half of the overall hourly earnings line.

Cleveland Police’s GRaD can be calculated as follows –

Since the GRaD for women is negative, the median woman at Cleveland Police must be earning less than the median man and hence their reported gender pay gap is incorrect.

There is another logic that can be used to explain why this is so.  The median woman is the woman standing in the middle of a female only line when the women are standing in order of their hourly earnings.  If we assume that the %s in the Cleveland Police chart represent actual numbers of employees of each gender in each quarter, then they would have 261 men (=79+78+59+45) and 139 women (=21+22+41+55).  The man in the middle of the male line is the 131st man and the woman in the middle of the female line is the 70th woman.  Counting from the lower income quarter, the 131st man must be in the upper middle income quarter since there are 104 (=59+45) in the bottom two quarters.  Likewise, the 70th woman must be in the lower middle income quarter since there are 55 women in the lower income quarter.

The advantage of the alternative logic is that it tells you which quarter the median man and woman are in where as the GRaD calculation simply tells you which half they are in.

The exception to the rule

The GRaD calculation is a very easy one to do in your head whenever you are reading a gender pay gap report for an employer.   However, there is an exception to the rule that you have to be aware of and if you’ve understood the concept of the Gender Ratio Differential, you may have spotted it already.

Compare these two graphics below.  The first is the same 12 employee example I used earlier, the second also has 12 employees who line up in the same order but have different hourly earnings.

The reason is obvious.  9 out of the 12 employees earn exactly the same i.e. £10 per hour.  This includes 4 of the 5 women and 5 of the 7 men.  Basically when a majority of staff are earning exactly the same and the effect is seen in both men and women, then by definition of the median, the median man must be earning the same as the median woman hence the gender pay gap is the same even though the GRad is not zero for both genders. 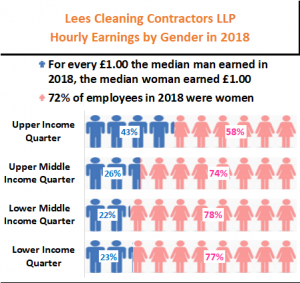 What kind of industries see lots of staff earning the same pay rate?  Lees Cleaning with a GRaD of +13.5 : -13.5 shown here are an example and that shouldn’t surprise us since the cleaners are very likely to be earning the minimum wage.  Hospitality and Care sectors also pay a lot of their staff a basic wage and it so happens that these are the 3 industries where you are most likely to find employers with no median gender pay gap.  They can still have a mean gender pay gap which will be driven by the salaries of the managers and directors but the median is often zero.

This exception means I need to modify my GRaD rule

Do we know if Cleveland Police come under rule 2 as above.  The answer is no they don’t since when we read their gender pay gap narrative, I find this paragraph that explains how they did their calculation at the bottom of page 1.

This clearly refers to 40 odd pay rates so rule 2 doesn’t apply.  It also explains why they made a mistake.  They were taking the median pay scale not the median woman.  Before you say “how stupid” I had already warned the EHRC (Equality & Human Rights Commission) in point 2 of this post “12 ways to improve gender pay gap reporting” that the statutory guidance was very poorly written and easily misunderstood by those who do not have statistical skills.

GRaD can identify other errors. 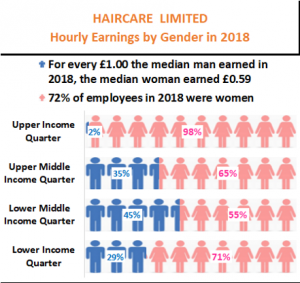 Take a look at HairCare Ltd here.  Have they made an error?  If so, what did they do wrong?

What could they have done wrong here?  Unfortunately they do not provide a written narrative but two possibilities suggest themselves to me.

I don’t which is correct but clearly they need to take a look at their submission again.

I have written a number of articles about errors made in gender pay gap calculations.

If you would like to receive notifications from me of news, articles and offers relating to diversity and pay gaps, please click here to go to my Newsletter Subscription page and tick the Diversity category and other categories that may be of interest to you.  You will be able to unsubscribe at anytime.

After an entire meteorological year where the temperature above the median for ever single month, … END_OF_DOCUMENT_TOKEN_TO_BE_REPLACED

Sir Donald Bradman is the GOAT (Greatest of All Time) of sporting GOATs.  All cricket lovers accept … END_OF_DOCUMENT_TOKEN_TO_BE_REPLACED