You are here: Home / Sport / All I want for Christmas is football!

Will there be any football this Christmas?  The Omicron variant of COVID19 is wreaking havoc with football and rugby schedules and the traditional Boxing Day lineup is in danger of being cancelled.  So what will football fans do instead?  The good news is I am giving a Christmas present to all football supporter that is almost as good as the real thing.  All you need are 2 packs of playing cards, a pen and paper or a spreadsheet and you can play a simple football simulation game which guarantees fun and excitement for all.

What you need to play football with playing cards

You will need two standard decks of 52 cards plus 2 jokers per pack making a total of 108 cards (104 standard cards plus 4 jokers).  It is important for your jokers to be distinguishable in some way.  In my packs of cards the jokers look different in each pack but if they are identical across the two packs you will need to put H (for home side) on two of the jokers and A (for away side) on the other two.

You also need a large enough table to lay out up to 30 cards at a time plus a pen and paper or spreadsheet to record your results.

How is the game played?

Shuffle the 108 cards together as thoroughly as you can and then deal out 6 non-joker cards (plus any jokers if they occur) face up to represent a single match.  Each non-joker represents 15 minutes of play whilst a joker is a sending off which changes the odds of the game but doesn’t represent a period of time.  If you are playing a cup match which has gone to extra time, then 2 more non-joker cards (plus jokers if they occur) should be dealt out to represent extra time.  If the match goes to penalties then a single card for each penalty is dealt out until someone wins.

If playing a competition, I usually deal out 3 or 4 games at once which may mean up to 28 cards laid out on your table.  Once you are familiar with the rules, I find I am able to deal out and record results at the rate of about 60 to 90 games an hour.  That means you can play a wide variety of league and cup formats.

What do the card values mean if no players are sent off?

Here is a photo of 3 games I’ve dealt out from left to right.  The left hand card denotes the 1st 15 minutes of the game and the right hand card is the last 15 minutes of the game.  I create a gap in the middle so that I can see the 1st half and 2nd half separately.  No jokers were dealt out here so that means all sides finished the game with 11 players and there were no sending offs.

The following cards are Goal Cards and equate to the following number of goals for a 15 minute period. 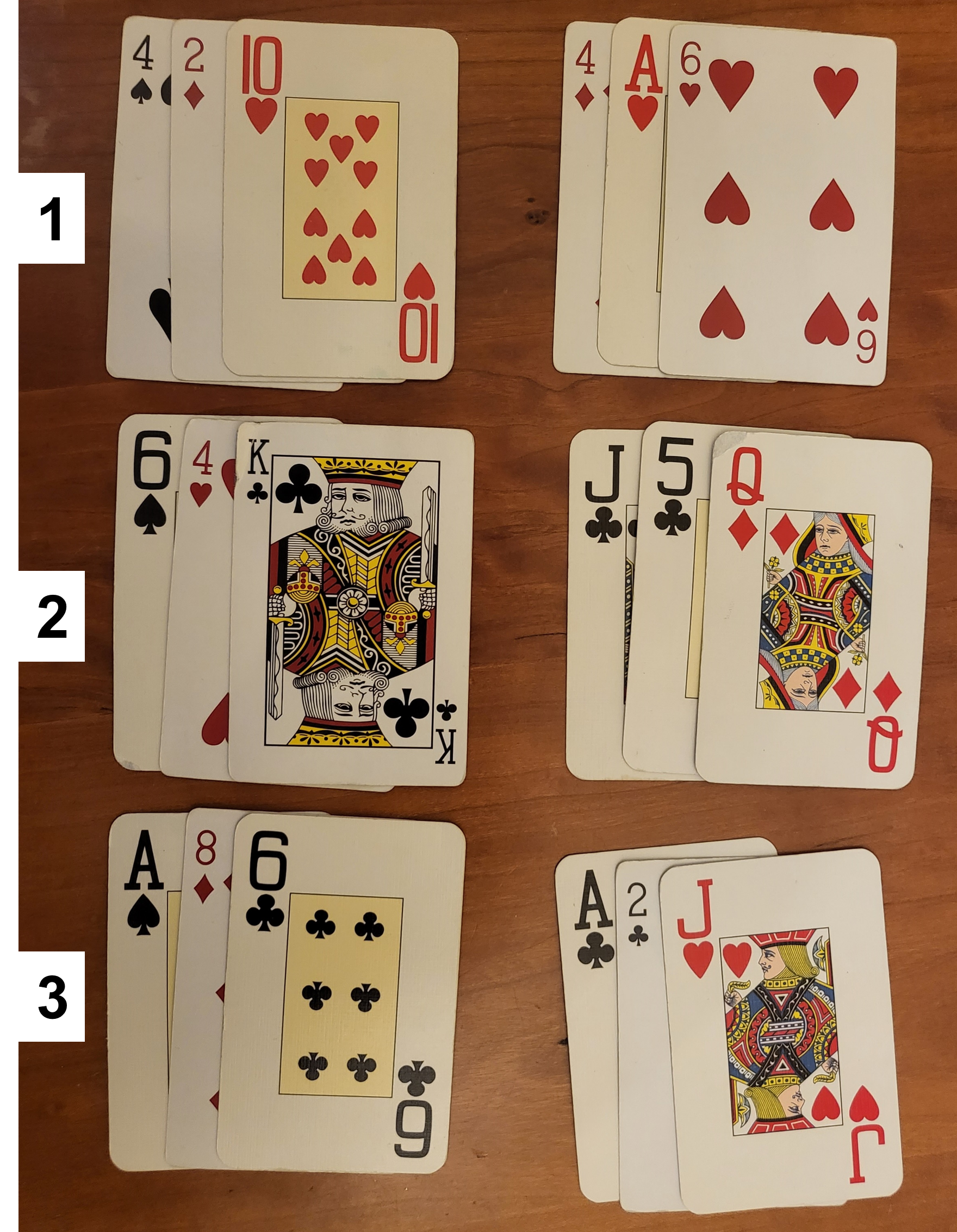 All other non-joker cards score nothing and are non-Goal cards.  This includes the BLACK JACKs.

So what are the final scores for the 3 games in the photo?

If the game is being played at a neutral venue (say a cup final) then the goal cards differ slightly as follows.

These are the rules intended to apply to league games and between teams of similar standard in cup matches.  If you are playing a competition which involves strong and weak teams e.g. an FA cup with a Premier League team playing a League One team, the rules for these games are explained in a later section.

What are the expected outcomes of a match?

Given the rules I’ve just described above, let’s look at the expected outcome.

How well does this compare with the actual premier league today?  Over the last 10 seasons, the average number of goals per game has been 2.74 and this is remarkably consistent as shown in the chart. 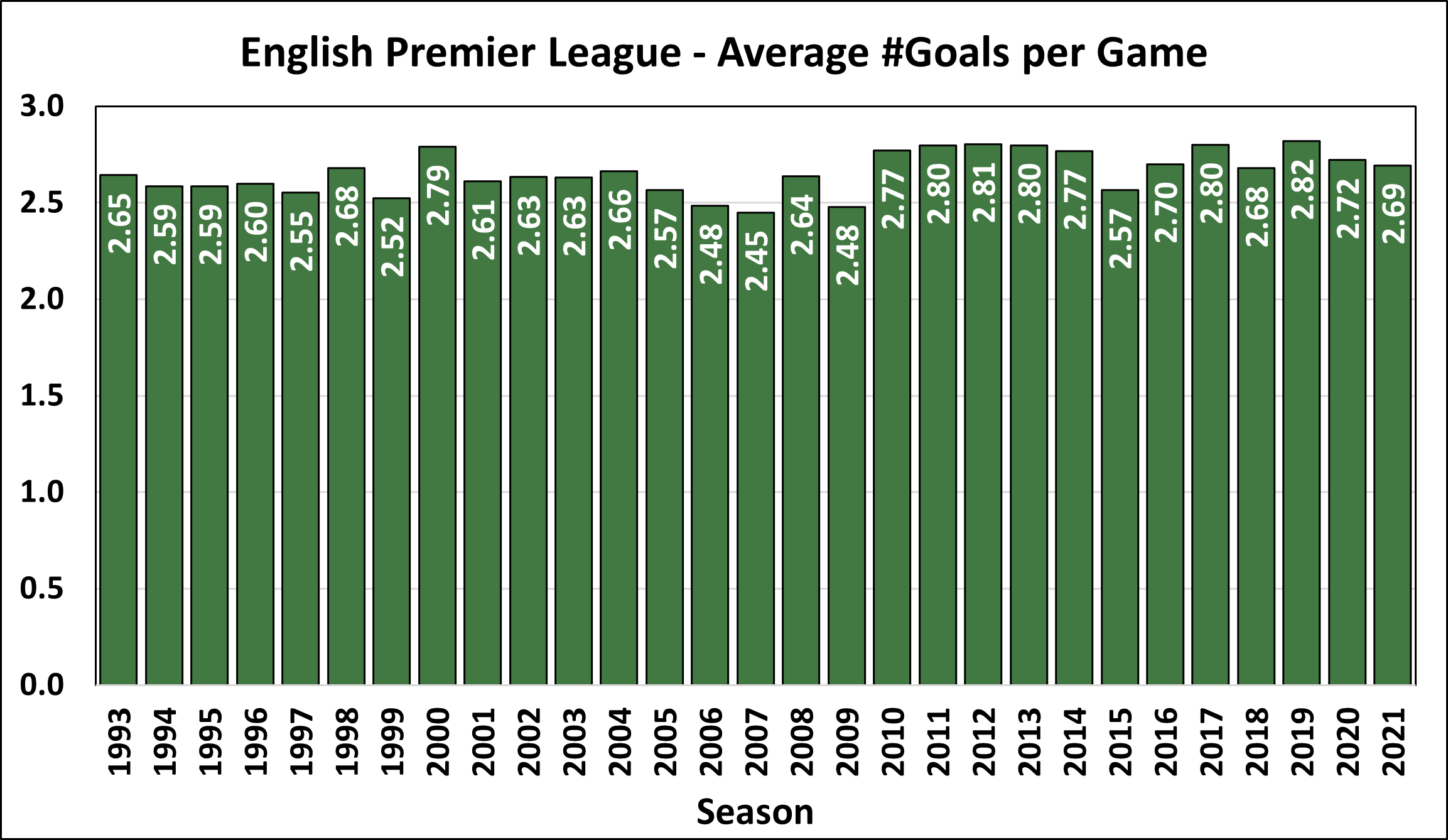 Last season (2020/21) was remarkable for the fact that the number of home and away goals were basically equal at 1.35-1.34.  Of course, almost the entire season was played without fans due to the COVID19 pandemic.  For the 5 seasons before that, the average score 1.54 – 1.20 which is slightly narrower than the 1.62 – 1.15 the playing card game gives you.  In fact, if I changed the rules so there were 19 1-goal cards for the home team and 13 1-goal cards for the away team, then the expected score would be 1.56 – 1.21 which would be perfect!  This could be done by making one of the red jacks a non-goal card and one of the black jacks a 1-goal card but I decided this would make like life too complicated and I am happy to stick with the rules above but do make this change if you want to.

The tables below show what the expected outcomes are in terms of home & away wins, draws and scores.  All of these can calculated if you are familiar with the Poisson distribution which is the bedrock of football analytics.  You can find out more about the Poisson distribution in my article from the 2017/18 EPL season when I attempted to predict what the final table would look like with 10 games to go.

How do the card values change if a player is sent off?

For every player sent off (SO) on a team as a result of their joker appearing, the goal cards change as follows –

If both teams have a player sent off then these cancel each other out and the 1st sending off rule above no longer applies i.e. we are back into a game with the rules where no sending offs have occurred.

Let’s look at some real examples and see if you can work out the final score.  We will assume that these are premier league matches with a home and away team. 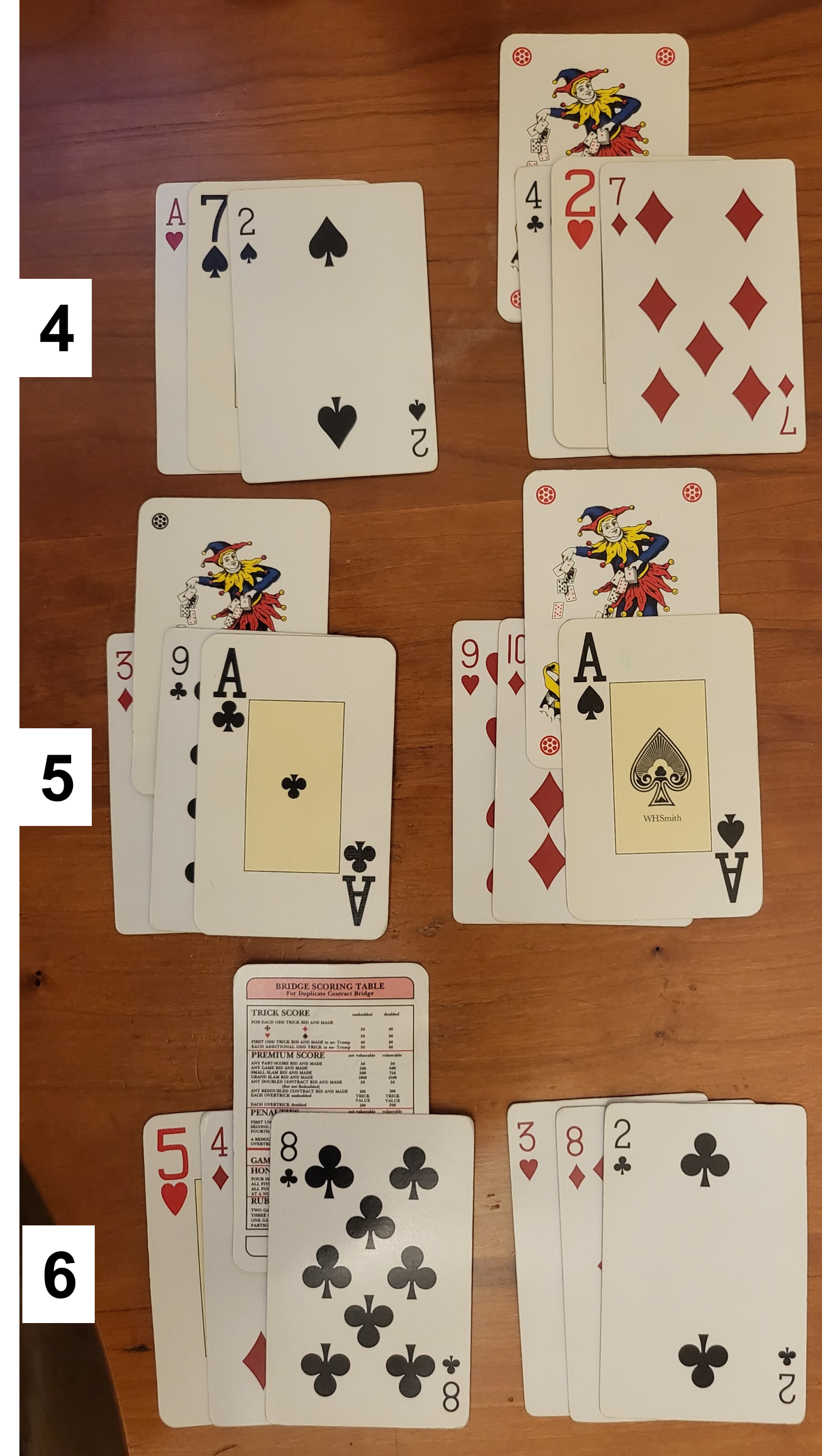 In my packs, I denote the joker with the harlequin figure as home sending offs and the jokers with lists of words and numbers as away sending offs.

The sending off rules I’ve listed here don’t change the expected number of goals per game which is still 2.77 but they do change the home:away split.  You should be able to work out that after a home team has a player sent off, their odds change from 4 2-goal and 16 1-goal cards to no 2-goal and 24 1-goal cards whilst the away team still has 4 2-goal cards and now has 16 1-goal cards.  That means both the home and away sides are expected to score 1.38 goals i.e. the home side loses its home advantage with a sending off.  Should the away side have a player sent off then the expected scoreline changes to 1.85 – 0.92.  With two players sent off, the expected scoreline is 2.08 – 0.69 if the away team has the sending offs and 0.92 – 1.62 if the home team has the sending offs.

What adjustment should I make for cup matches?

Since there are only 2 jokers (and thus a maximum of 2 sending offs) for each team in the pack, why have I listed up to 5 sending off rules in the previous section?  The answer is for cup games between say a Premier League team and a League 2 team.  What I do with matches like this is say that since the teams are 3 tiers apart, the lower league team starts with 3 virtual sending offs (from the point of view of the rules) and should they have 2 players sent off, they end up with 5 sending offs in all.  I have found this to work very well.

It’s worth revisiting game 6 above, this time assuming it’s a cup match between a Championship team at home and a League Two team away.  Because they are 2 tiers apart, the League Two team starts with the disadvantage of two virtual sending offs which means any black twos are already 1-1 cards and black aces are 2-goal cards for the championship team.  Then the League Two team has a player sent off in the second half which now means they are regarded as having 3 sending offs which means the black twos are now 2-goal cards for the home team so that means the home team wins 2-0 instead. 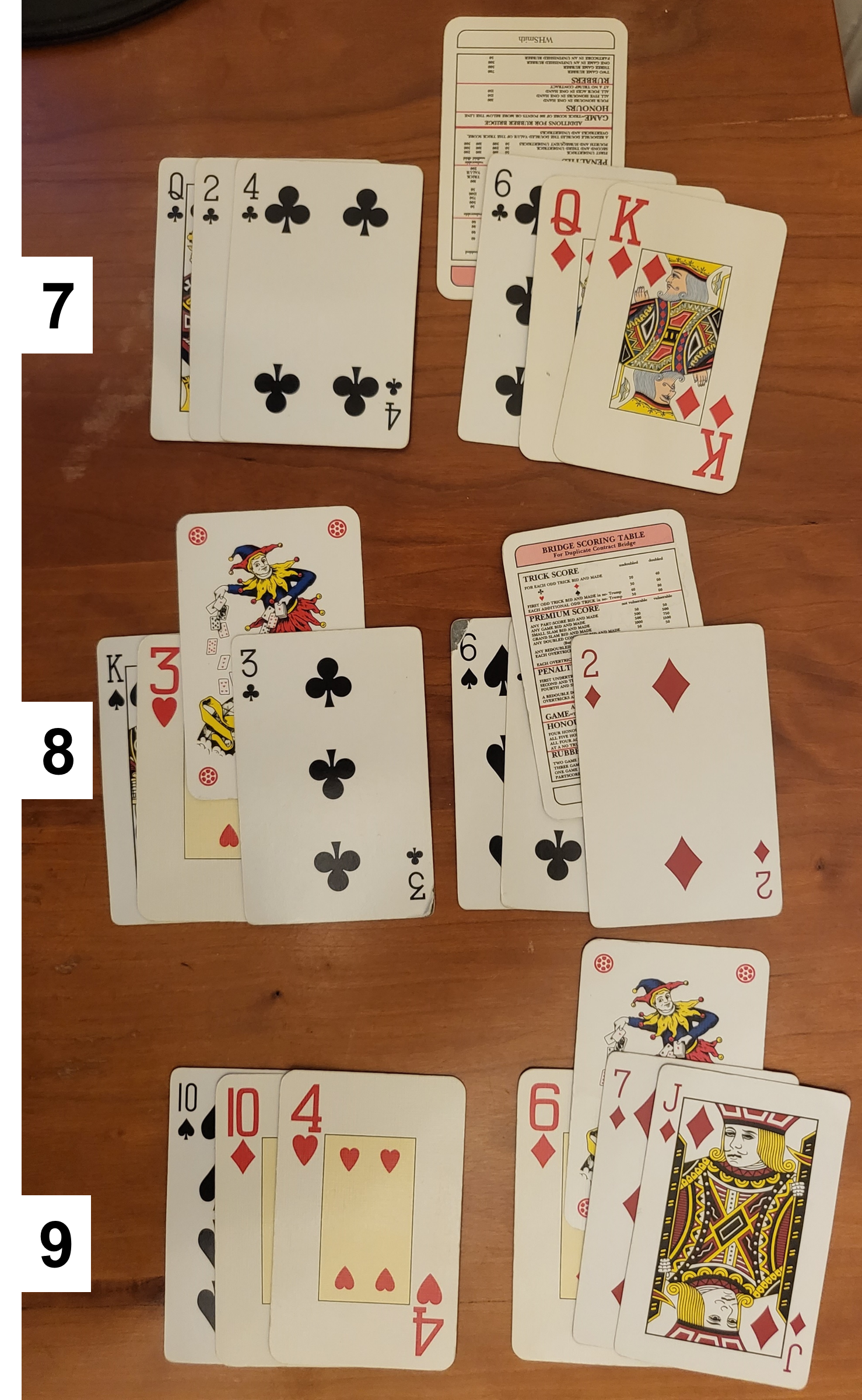 Try and work out the results of the next 3 games.  Assume the away side is a premier league team and the home team are respectively from top to bottom, a championship, league 1 and league 2 team.

The sending off concept takes practice to get used to but once you’ve grasped it, it will become 2nd nature to read the cards.

What if a match goes to penalties?

If the teams are deemed equally matched then a penalty shoot out is played by turning over a card for each penalty and recording the outcome as follows.

Out of 108 cards, there are 32 goal and sending off cards so that means there is a 70:30 chance of penalties being scored which feels about right to me.

It’s up to you if you want to favour the stronger team in a penalty shootout.  The simplest way to do this is say sending off cards are now goals and perhaps the red jacks as well.  Together that would change the probability of scoring a penalty from 70% to 80%.

I do hope you enjoy this playing this game.  I invented it over 30 years ago and have played it on and off over the years, refining the concept as I went along.  As much as possible I wanted the outcomes to be reasonably realistic of proper football matches.  You should find it exciting to play especially when it’s your team who are 1-0 down after 75 minutes and waiting to see what the 6th card is.  Trust me, I’ve had a few of those games!

Please do leave your comments on this Twitter thread.  All feedback is welcome.

December marks the start of the 2022 meteorological year and it was very grey, dull and boring. … END_OF_DOCUMENT_TOKEN_TO_BE_REPLACED

Will there be any football this Christmas?  The Omicron variant of COVID19 is wreaking havoc with … END_OF_DOCUMENT_TOKEN_TO_BE_REPLACED