Last month, I expressed my cynicism at the media crying wolf over bad weather in the UK.  The wolf finally appeared but in the first week of March instead so that means that February still did not see the wolf as I explain in this month’s UK Weather Tracker.The meteorological year starts in December which is why December appears as the 1st data point in the charts below.  More information on the layout of the charts can be found in this post.  Points lying between the upper and lower deciles are shown as open black circles, points lying between the decile and minimum/maximum are shown as solid black circles and any month with a new record is shown as solid black squares. 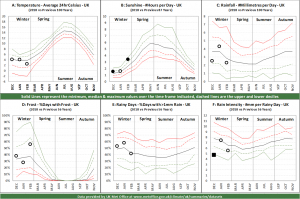 For February, every chart bar sunshine has an open circle for each of the 6 measures indicating that February was another unremarkable month.  The exception was that it was the 2nd sunniest February on record but given this is still winter, I doubt that we pay too much attention this.  As the chart shows, December was also a very sunny month indicating that the winter of 2018 has been especially sunny, a point I expand on in my review of UK Winter Weather Trends.

Given all the news headlines about mega cold snaps coming our way which never materialise, I couldn’t help but think the media had run out of stories to print.  O 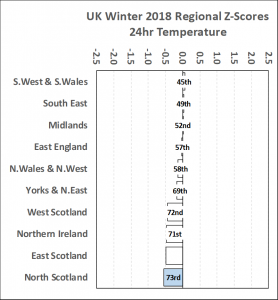 f course another reason for my cynicism could be that I am living in an area (South West) that has seen mild weather whilst the rest of the country suffers.  At the moment, I do not track regional statistics every month but I do track temperature by season.  The chart shown here, is the Z-Score for each region for the 2018 winter.  A Z-Score is simply the regional temperature minus the long term average for that region divided by the long term standard deviation for that region.  Doing this, gets around the issue that each region is different on average whereas z-scores all have the same scale, namely number of standard deviations from the mean.

The chart that I have been living in the mildest region for this winter with a z-score of almost zero i.e. the temperature was in line with the long term average.  People in North Scotland though lived through a winter where the temperature was 1/2 a standard deviation below the average.  For z-scores, we would not get excited by such variations, it is when z-scores approach +2 or -2 that we should start commenting.  This can be seen from the labels on the bars which shows how winter 2018 compares with the previous 109 winters and North Scotland, it was the 73rd warmest winter on record or if you prefer, the 37th coldest winter on record.  Either way, it was not something to get excited about and I won’t be apologising to Scots for my cynicism!

"I mentioned it once but I think I got away with it!" Basil Fawlty didn't get away with it in … END_OF_DOCUMENT_TOKEN_TO_BE_REPLACED

May 2022 was the 5th warmest May on record in the UK.  Whilst temperatures are rising as the days … END_OF_DOCUMENT_TOKEN_TO_BE_REPLACED

Whilst COVID19 was ravaging the world in 2020 & 2021, I felt there was little point in updating … END_OF_DOCUMENT_TOKEN_TO_BE_REPLACED