My latest UK weather tracker shows that July has been an unremarkable month and it would appear that the summer in 2017 will also be unremarkable.  Believe it or not, I have predicting this for the last few years and I will explain why in a separate post in September.

As always, the meteorological year starts in December which is why July appears as the 8th data point in the charts below.  More information on the layout of the charts can be found in this post. 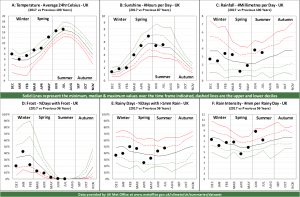 Before calculating this, we need to assume that the 6  variables have no relationship with each other which is a dangerous assumption to make and one that I will be exploring in September but for now, I will make this so.  Then the probability of two variable being between the deciles will 4/5 x 4/5 or 0.8^2.  With 6 variables, the equivalent calculation is 0.8^6 which is equal to 0.262 or 26.2%.  So an “unremarkable” month would be expected to occur once in every 4 months which is actually not that common and therefore should be regarded as remarkable rather than unremarkable!

The converse of this is that for 3 in 4 months, we can expect at least of the variables to have an “uncommon” value perhaps even a near record value.  This is a good demonstration of the dangers of analysing MULTIVARIATE data sets.  If you are tracking many indicators at the same time, the odds of all indicators being unremarkable are in fact quite low.  Yet the human tendency is to observe unusual values and to ask why is that happening?  In fact, nothing is happening except normal chance.  This is a variant of the false positive fallacy that humans are prone to.

Economic indicators are especially prone to this illusion since there are so many indicators available and if you are determined to present a positive or negative picture of the current economic climate, then you can nearly always find an indicator or indicators that will prove your point.  Such claims are quite common these days with the debate about the effects of Brexit and I intend to start an economic indicator tracker in the near future to help people to make sense of the latest economic statistics.

"I mentioned it once but I think I got away with it!" Basil Fawlty didn't get away with it in … END_OF_DOCUMENT_TOKEN_TO_BE_REPLACED

May 2022 was the 5th warmest May on record in the UK.  Whilst temperatures are rising as the days … END_OF_DOCUMENT_TOKEN_TO_BE_REPLACED

Whilst COVID19 was ravaging the world in 2020 & 2021, I felt there was little point in updating … END_OF_DOCUMENT_TOKEN_TO_BE_REPLACED