My latest UK weather tracker shows that the November 2017 was the 9th brightest on record which is some comfort for those that curse the onset of dark evenings with the change of clocks.

As always, the meteorological year starts in December which is why November appears as the 12th data point in the charts below.  More information on the layout of the charts can be found in this post.  I have made a small change in the chart format this month with points lying between the upper and lower deciles being denoted by open black circles and points lying between the decile and minimum/maximum remaining as solid circles.  Should we get a month with a new record, I will denote this with solid black squares. 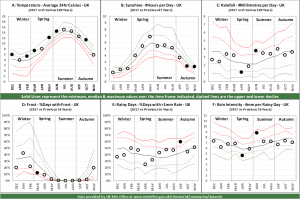 The only notable point about November is that it was the 9th brightest on record.  As someone who is partially sighted and night blind due to Usher Syndrome, I have long held November to be my least favourite month.  With the clocks going back, the sudden drop in brightness that one gets as evening comes around really knocks me back and makes me feel that winter is here.  So I suppose a brighter November than normal is something to be thankful for.

Looking at the year as a whole, we can see that 2017 was an unremarkable year compared to the last 100 years in terms of sunshine, rainfall and frost.  For temperature, there were 6 months where the temperature was above the upper decile and no month was below average.  This reflects the step change we have seen in our climate over the last 100 years.

UK Inflation has risen sharply since the start of 2022 and dominates the media and politics today.  … END_OF_DOCUMENT_TOKEN_TO_BE_REPLACED

Rishi Sunak is the UK's first Prime Minister from a non-white ethnic minority. Did this happen by … END_OF_DOCUMENT_TOKEN_TO_BE_REPLACED

The weather in the UK for October was warmer and sunnier than normal.  Overall we are heading for … END_OF_DOCUMENT_TOKEN_TO_BE_REPLACED

The weather in the UK for September was unremarkable.  Perhaps that is a welcome change after the … END_OF_DOCUMENT_TOKEN_TO_BE_REPLACED

The 2022/23 Women's Super League (WSL) kicks off this weekend in England.  After the Lionesses … END_OF_DOCUMENT_TOKEN_TO_BE_REPLACED