You are here: Home / Diversity / Pay Gap Case Study #4 – What is the gender pay gap at Novartis UK?

Welcome to my next case study where I look at the 2019 pay gap figures of Novartis UK.  They caught my eye when they posted on LinkedIn the following statement.

“… our 2019 gender pay report which highlights that on average, women earn more than men across all of our UK sites and divisions…“

When I looked at the two legal entities that were required to report gender pay gaps, I saw that both reported pay gaps favouring men instead.  Something odd is going here and it’s a perfect case study to show why anyone who analyses pay gaps needs to pay more attention to a Bletchley Park codebreaker from world war 2 who introduced the world to Simpson’s Paradox.

Why I write these case studies

All my case studies are intended to illustrate good and bad practice with gender pay gap statistics and to see what we can learn from them.  It must be borne in mind that whilst we want to see the pay gap close at a national level, that can only happen if change happens within individual organisations in the first place.  In the front line of such change will be the HR department who in my experience find basic statistics a struggle and so I hope these case studies will be illuminating.  I have written 3 before this one:-

In their 2019 gender pay gap narrative, Novartis UK state that for every £1 earned by the median man, the median woman earns £1.11.  Novartis UK though is not the legal entity required to report but is instead a group consisting of 3 legal entities

Clicking on those links will take you to the government’s gender pay gap website where you can see their published figures.  For this post, I will be using my own spreadsheet which you can download for yourselves here.  If you use my spreadsheet, you will be able to produce these two charts. 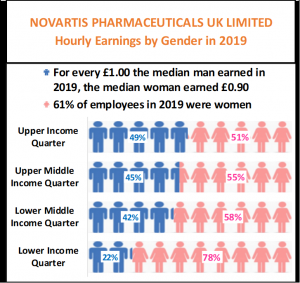 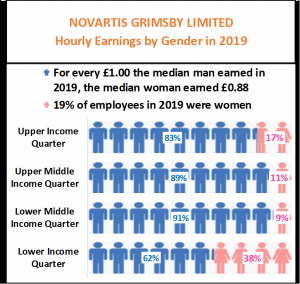 So according to Novartis UK, 90% (1165 out of 1300) of employees work for employers with median gender pay gaps slightly larger than the 2019 median of all employers which is 9.1 pence in the pound against women but when they are combined into a single entity, the same employees suddenly find they are working for an employer with a gender pay gap favouring women to the tune of 11 pence in the pound.  How can that happen?

I first introduced the concept of Simpson’s Paradox in point 10 of my article “Unequal Pay & the Gender Pay Gap are not the same thing!“.  I used the analogy of an onion and explained that the overall gender pay gap for an employer is simply the outer skin.  When you start to peel away the layers, what you see can be very different indeed especially when the conclusion completely flips as has happened here with Novartis.  Edward Simpson (1922-2019), a Bletchley Park codebreaker, was the first to record this phenomena and Novartis UK are simply the latest example to fall victim to the paradox that Simpson first described in a paper in 1951 which built on work done before by Karl Pearson & Udny Yule.  Anyone who produces and analyses pay gaps need to be aware of this paradox.

and at the 3 legal employers’ level.  They do not explicitly say many women work in the smallest employer but it is not difficult to work it out since the number of employees and the % that are women within the group, Pharma & Grimsby are known.

Since each income quarter must by definition contain 1/4 of the total number of employees, it is similarly not difficult to construct our

next table which counts the number of men and women within each income quarter by employer.  Using logic that I have explained many times before, I have flagged for each gender and employer, which income quarter the median person must be in as bold underlined numbers.  For example, there are 288 men working at Grimsby so the median man there will be the average of the 144th & 145th men at Grimsby should they stand in a line in order of their hourly pay.  Since there are 136 (=81+55) men in the bottom two quarters, the median man must be in the upper middle income quarter at Grimsby.

How is it possible for the median man to be in the upper middle income quarter at both Pharma & Grimsby but in the lower middle income quarter for the whole group?  Even more striking, why is the median woman is in the lower quarter at Grimsby and lower middle at Pharma but in the upper middle when all 3 employers are combined?  It might be that the ANOther employer is female dominated in the top two income quarters but it is a small employer so it can’t have that much an effect can it?

The answer, which is what Simpson’s Paradox is all about, is that the pay scales at Pharma & Grimsby must be very different.  The Pharma division is based in West London and most employers pay London employers higher salaries, currently 30% higher based on latest ONS ASHE data.   Since Grimsby is heavily male dominated and presumably pays much lower salaries than Pharma, when the 288 lower paid (on average) men are combined with the 320 higher paid (on average) men, the median man ends up being on a lower pay rate than for Pharma alone.  Conversely, when 67 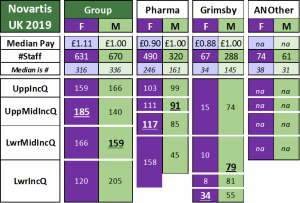 I have no idea if this table is correct since Novartis don’t publish their pay scales but if 205 men are in the lower income quarter for the whole group, where did they come from?  With only 45 men in the lower income quarter at Pharma, the remainder must have come from Grimsby accounting for the lower, lower middle and part of the upper middle quarters.  Likewise, where did the 159 women in the upper quarter for the whole group come from?  Obviously 103 must be from Pharma but perhaps most of the remainder came from ANOther’s upper quarter since they can’t have come from Grimsby.

Which is the true gender pay gap at Novartis?

In my recent post “How to close your gender pay gap by playing BlackJack“, I stated that a pay gap can only be truly eliminated if first of all, you see the same gender ratio wherever you look in an employer be it at a site level, division, pay grade, department, etc.  To use my onion analogy with respect to Simpson’s paradox, when I peel away the top layer, I see that same image and I keep seeing the same image as I peel away more and more layers.

That is not the case at Novartis.  The outer skin of Novartis at the group level is almost 50:50 men:women but when I peel away to uncover Pharma & Grimsby I see radically different pictures with 40:60 & 80:20 men:women respectively.  At the same time, the locations of the two sites and the nature of the work they do are so different that the pay scales are very different.  They are consequently vulnerable to Simpson’s Paradox depending on the relative number of employees at the two sites.  Currently this is 9:4 Pharma:Grimsby but suppose Novartis decided to double the workforce at Grimsby to make the ratio 9:8 instead.  Then the number of lower paid workers would presumably increase considerably, they would be 80% likely to be male and so the hourly pay of the median man at the group level would fall even further and the gender pay gap would widen even further in favour of women.  Notice this would still happen even if the gender pay gaps at Pharma & Grimsby remained unchanged.

For this reason, I consider the group level gender pay gap favouring women to be the result of a statistical quirk rather than a genuine reflection of the company.  I consider the gender pay gap we see in Pharma and Grimsby separately to be closer to the true picture.  In other words, whereever I look, the lower paid employees are more likely to be female and the higher paid employees are more likely to be male.   Mind you I could be completely wrong and Simpson’s paradox could rear its head again when I dig into the details of Pharma say and the apparent pay gap favouring men in Pharma turns out to favour women when I start looking at individual teams there.

In many ways, the real answer to the question of what is the pay gap at Novartis is “it depends”.  Novartis chose not to submit their group level data to the government’s pay gap portal so someone who doesn’t read this post or Novartis’ narrative will only see the Pharma & Grimsby numbers separately and would conclude the pay gap favours men.  What Novartis cannot do is make this statement on their LinkedIn post and in their narrative:-

“… our 2019 gender pay report which highlights that on average, women earn more than men across all of our UK sites and divisions…“

This is factually incorrect.  They have made a legal submission to the government stating that the median/average man earns more than the median/average woman at their Pharma division and again at their Grimsby site so the last part of this statement is completely false.  What they should have said –

“The data we have submitted to the GEO for the two legal entities we are required to report on show that both have a gender pay gap favouring men.  When we combine these two entities with a smaller 3rd entity that did not need to be reported, we find that the overall gender pay gap for the UK favours women instead.  This is a result of a statistical quirk known as Simpson’s Paradox and does not reflect the reality of Novartis UK today.  More in depth analysis shows that within the various teams that make up Novartis UK, it is still more likely to be the case that higher paying roles will be filled by men and lower paid roles will be filled by women and a lot of work is needed to change this.“

The moral of Novartis’ story is be aware of Simpson’s paradox and make sure you look at the different layers of the onion.  Don’t rely on what you see on the surface!

I have written a number of articles about pay gaps.  You can find the full list of my articles grouped by theme here.

"I mentioned it once but I think I got away with it!" Basil Fawlty didn't get away with it in … END_OF_DOCUMENT_TOKEN_TO_BE_REPLACED

May 2022 was the 5th warmest May on record in the UK.  Whilst temperatures are rising as the days … END_OF_DOCUMENT_TOKEN_TO_BE_REPLACED

Whilst COVID19 was ravaging the world in 2020 & 2021, I felt there was little point in updating … END_OF_DOCUMENT_TOKEN_TO_BE_REPLACED