Drawing conclusions when confronted with missing data is an important skill for a statistician to master.  A variety of methods are available and I will use both a simple method (Like for Like) and a more complex method known as Imputation in this article.  Hopefully I will end up with the same answer!

Which employers should be included and excluded?

My free spreadsheet of all reported gender pay data lists a total of 11,728 employers.  Not all of them reported data in all 3 years either because they were too small or because they went bust or because they have not yet reported for 2019 due to the coronavirus outbreak.  As of 5th June 2020, this was the situation,

When estimating the trend between two years, there is no point in including employers who reported for a single year only so the last group will be excluded from the analysis.  Our analysis will focus on the other 3 groups of employers.  We already know what the trend in 2019 is for groups 1 & 2 so the imputation methods discussed in this article is about imputing the trend for group 3.

When I looked at trends last year between 2017 & 2018, I made a point of excluding employers whose data looked to be incorrect.  I have done the same thing again for this year using the criteria I first explained in my post “Year on Year Trends – The Good, Bad and Unilever“.  This reduces the total number of employers to be included from groups 1 to 3 above from 10,301 to 9,532, a reduction of 7.5%. 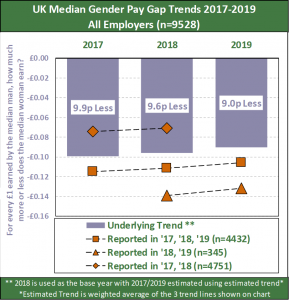 The key to this method is that all 9,532 employers used reported their data in 2018.  The median of the reported median gender pay gaps of these employers was the 9.6p less for women as shown in the chart so this is an actual data point, not an estimated data point.

I then assume that group 3 (who have not yet reported 2019 data) follow the same trend and that their median gender pay gap fell by 0.6 p in the pound.  Now, since I already know the median of all 3 groups in 2018 was 9.6p less for women, subtracting 0.6p from this gives my estimated median gender pay gap for 2019 of 9.0p less for women assuming the median man earns £1.

By now, you should have noticed two things about the chart.  First, groups 1 & 3 more or less agree with each other regarding the change between 2017 & 2018 and groups 1 & 2 similarly agree with each other on the change between 2018 & 2019.  Second, the 3 groups are at different levels with group 2 having large pay gaps, group 3 having small pay gaps and group 1 in between.  Why this should be is not known but this explains why taking the median of all employers in each year separately doesn’t work.  If I had done that, then the medians for the 3 years would have been respectively 9.2p less, 9.6p less and 10.8p less.  This incorrectly suggests a widening pay gap not a narrowing pay gap as shown by the chart.

This analysis can be repeated for any sub-population of employers.  I have already done this for 7 sectors defined by Practical Law, an online magazine about legal matters.  If you would like me to do something similar for sectors of interest to you, please contact me to obtain a quote.

The simple method of estimating trends makes one very large assumption.  It is that all employers in group 3 (yet to report 2019) are similar to the employers in groups 1 & 2.  That may be unwarranted since we already know that group 3 employers had smaller pay gaps in the first place.  The two charts below show my estimated trends for small employers (those with less than 500 employees) and large employers (those with 500 or more employees) and it is clear that these are different. 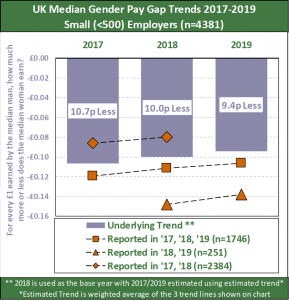 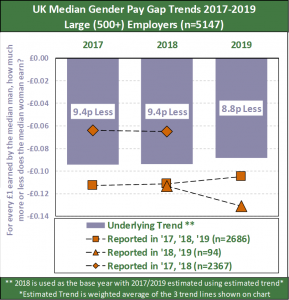 Employer size is only one factor though.  What about other factors such as industry sector, gender ratio, previous year’s pay gap, bonuses paid, etc?  This is what motivates the more complex approach of imputation.

An imputation model attempts to estimate the change in the median gender pay gap for each one of the 4,751 employers in group 3 based on known characteristics.  A statistical model is built using the 4,432 employers in group 1 only since we already know what the change was between 2018 & 2019 for this group.  The full list of factors I explored in my statistical model were:-

Not all are expected to be significant.  In an ideal world, I would find that none of these factors are predictive of the what the change in median gender pay gap would be in 2019 and therefore I only need to use the Simple Like for Like method of estimating trend.

After building and testing a regression model with these 9 factors, I concluded that only the first two factors from the list above were significant, both statistically and practically, hence why they are highlighted in the list.  The relationship between the change in gender pay gap between 2018 & 2019 and these two factors is shown in the chart below.  The R-squared for this model was only 10% which means that 90% of the observed variance in gender pay gap trends in group 1 in 2019 are due to other factors. 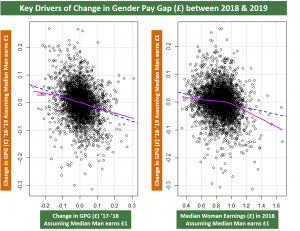 The dashed black line is the fitted relationship in the model and the solid pink line is a measure of whether or not a linear fit is appropriate (in this case it is).  The nature of the fitted relationship is very interesting but is not a surprise to me given what I have said before about the role of chance in changes in gender pay gaps.  As you can see, if an employer had no gender pay gap or a pay gap favouring women or the gender pay gap narrowed in 2018, then the negative correlation apparent here means that in 2019, we would expect the gender pay gap to widen in favour of men.  Conversely if an employer has a large pay gap against women or had seen their pay gap widen against women in 2018, then on average their pay gap will narrow in favour of women in 2019.

This effect is entirely consistent with a well known phenomena in time series called “reversion to the mean” or Auto-Correlation.  It occurs when there is an underlying trend over time but random fluctuations around that trend occur so that the actual trend is sometimes higher and sometime lower than the expected trend.  In the case of pay gaps, the random fluctuations mostly come from employee turnover.  Suppose 10% of your employees leave the company every year and they are equally split between men & women, there is no guarantee that they will be replaced by an equal split of men and women.  In some years, you might recruit more men than women, in others, you might recruit more women than men.  If your recruitment process is genuinely non-discriminatory, then you would have to be unlucky to have a long run of years where you recruit more men than women.  Instead, it is more likely to fluctuate between various scenarios.  The whole process is not dissimilar to tossing a coin whereby a long run of tosses giving the same result would be unlikely.  The end result is fluctuations in your gender pay gap due to chance alone.

Digression aside, if I apply my imputation model to all employers in group 3, I find that the median gender pay gap in group 3 narrowed by 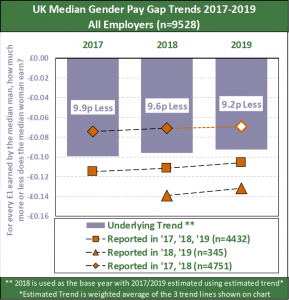 Which is the better imputation method?

Ultimately, I am most interested in seeing that there is a trend by which the pay gap against women is narrowing and since both methods give the same answer, I am not too bothered about choosing between them.  The simple like for like method is easier to explain so I am happy to mostly use this estimate.  However, the complex imputation method does give some insight as to how pay gaps can change year on year, so this estimate should be born in mind as well.

I have written a number of articles about pay gaps.  You can find the full list of my articles grouped by theme here.

After an entire meteorological year where the temperature above the median for ever single month, … END_OF_DOCUMENT_TOKEN_TO_BE_REPLACED

Sir Donald Bradman is the GOAT (Greatest of All Time) of sporting GOATs.  All cricket lovers accept … END_OF_DOCUMENT_TOKEN_TO_BE_REPLACED