With the publication of the 2018 gender pay gap data, many people want to know if the UK has made progress on closing its gender pay gap.  The short answer is there was no change in 2018 from 2017.

I should say at this point that name changing is a way an unscrupulous employer could use to avoid scrutiny of year on year changes, at least without some work.

After removing these employers plus some other employers whose data did not look right (see my post last year about some common errors), I was left with a total of 9,121 employers to perform my year on year comparison.  It is always a good idea to start with a top line view of the 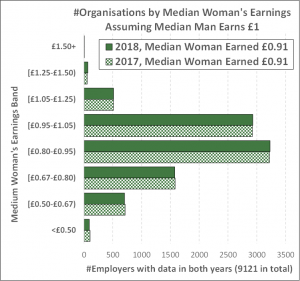 data and I have done this with the bar chart shown here.  As I recommended last year in my post “12 steps to improve public confidence in gender pay gap data” I believe the best way to present pay gaps is to measure what the Median Woman is earning assuming that the Median Man is earning £1.  I have defined any organisation whose median woman earns between 95p and £1.05 as achieving gender parity.  I can justify this definition by allowing for the laws of chance that can cause an employer to have a pay gap even when they are a perfect non-discriminatory employer.  The other bands shown are based on convenient numbers and also to have symmetry between those employers who favour women and those who favour men e.g. the band 67p to 80p is the flip side of the band £1.25 to £1.50.

Overall, the median of the median woman’s earnings is 91p in 2018 and this is unchanged from 2017.  It turns out that my steps to exclude employers as above don’t in fact change these figures so it was unnecessary in this instance but I believe in following good statistical practice as much as possible.  One question to ask is whether the apparent static top line picture is the same for all 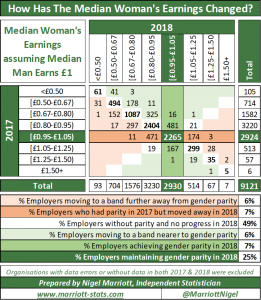 employers?  The answer is no, some employers have increased their pay gaps, some have narrowed their gaps and others are unchanged.  This is summarised in the matrix here which shows how many employers have moved from one band to another.

I should make it clear that I do not consider tiny changes in a pay gap to be significant.  Any change of less than 5p can definitely be due to the laws of chance and even changes of 10p can be due to chance for small employers.  This is why I like this matrix approach as all I now need to do is count how many employers have changed bands and in the right direction as well.  The matrix is colour coded (in an apparent Union Jack layout!) with green representing changes in the right direction towards gender parity and red representing changes in the wrong direction away from gender parity.  Note I consider the goal to achieve gender parity and therefore a pay gap favouring woman is just as bad as a pay gap favouring men.

So why has there been no change overall?  I think it is reasonable to conclude that the overall picture is one of a static gender pay gap in the UK despite some changes at some employers.  I would like to put forward the following hypothesis which I know will upset some people but it is a hypothesis consistent with the observed data though it is by no means the only hypothesis.  It is,

“The lack of any substantial change in the gender pay gap is consistent with the hypothesis of there being no widespread issue with equal pay.”

I have insisted on numerous occasions that gender pay gaps and equal pay have nothing to do with each other so surely I am contradicting myself here?  If there is a widespread issue in the UK with women being paid less than men for doing exactly the same job , which is illegal, then I contend that any employer reviewing their gender pay gap data in 2017 with a reasonable degree of competence, should be able to spot this issue.  Once spotted, it can easily be corrected by changing salaries there and then.  If this has happened on a wide scale, then it should feed through at the national level and cause a narrowing of the gender pay gap provided no countering change happens at the same time (such as extensive restructuring or bankruptcies of companies). If there is no widespread issue, then closing the gap will be harder to do and will take longer than a year for changes to be seen.   Given the lack of change, this hypothesis is still standing and has not yet been disproved.

Of course there are two other hypotheses that can explain the lack of changes.  The first is that employers don’t care about gender pay gaps and aren’t prepared to do anything to change things.  The second is that employers do not know how to analyse their data properly.  Based on my experience of working with non-statisticians in many industries, the latter would not surprise me at all if it turned out to be the case.  So if you are struggling to do an analysis of your data then please do contact me.

After an entire meteorological year where the temperature above the median for ever single month, … END_OF_DOCUMENT_TOKEN_TO_BE_REPLACED

Sir Donald Bradman is the GOAT (Greatest of All Time) of sporting GOATs.  All cricket lovers accept … END_OF_DOCUMENT_TOKEN_TO_BE_REPLACED