You are here: Home / Diversity / Pay Gaps #13 – How could Ethnicity Pay Gap Reporting be introduced in the UK?

I consider 5 options, some of which I hinted at in my article last year.

I will try to avoid giving away my preferred option until the end so that you can consider pros and cons yourself beforehand.

Those who call for the existing gender pay process to be extended to ethnicity (& other protected characteristics) never address the key difference between gender and other characteristics.  Gender

is a 50:50 proposition i.e. society has equal numbers of men and women whereas all other characteristics are majority-minority propositions with typically 90%+ falling in the majority category.

If an employer with 250 employees (the threshold for reporting) reports a gender pay gap, on average they will be comparing 125 men with 125 women.

Unlike gender (from the point of view of the regulations!), ethnicity is not binary.  A white v non-white comparison is unlikely to be of interest.  Instead, it is more likely that a split by multiple ethnicities will be wanted e.g. black, asian, mixed, other, not given.  That 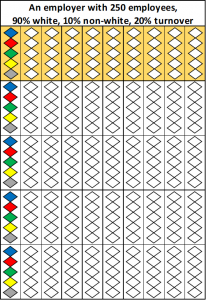 would mean our employer with 250 employees would, on  average, be comparing 225 white with say 5 black, 5 asian, 5 mixed, 5 other and 5 unknown employees.

The majority-minority effect means that employers will be trying to draw conclusions from extremely small sample sizes in some cases, often in single figures.  You don’t have to be a statistician to know that any ethnicity pay gap calculated from small sample sizes will be unreliable.  That is before we take into account employee turnover.  After all, the reported pay gap is based on a snapshot from the employer’s April payroll and in a year’s time, 20% of employees could have left and been replaced and they will be a different mix of gender, ethnicities and roles.  This introduces additional sampling error to our estimates.

As a professional statistician, I am trained to draw conclusions from small sample sizes and this skill is not something that an HR professional can learn easily,  So my proposal is that if EPG reporting is to be the same as GPG reporting, employers must have their EPG figures audited by a trained statistician.  The statistician would be required to flag which figures are reliable enough for interpretation and which must be regarded as unreliable with no conclusions being drawn.  That way, employers, employees and the public will know which figures they can focus on.

The problem with this option is twofold.  First it imposes additional costs on employers who will need to consult a statistician like me.  Second and more important, a statistician cannot magic up a solution for really small sample sizes of say 10 or less so the end result could be a lot of employers submitting data that is pronounced as unreliable by the statistician.

Small sample sizes is a recurring problem with ethnicity pay gap reporting and other majority-minority characteristics.  However, it is possible to argue that in some instances, an employer will still have a good idea as to whether a reported ethnicity pay gap is due to real issues rather than statistical chance.  This is something that might be measured using a 5-point qualitative scale instead such as:

The idea is to start with EPG calculations like we have for GPG but to then convert these figures to the 5-point scale using an expert judgement based on an assessment of the employer’s practices.  Clearly this would require an external independent input which would be a mixture of statistical and HR expertise.

The difficulty with this idea is specifying what the expert judgement would involve.  It also repeats the issue with the first option of adding cost to the employer.

The easiest way to resolve the small sample size issue for majority-minority characteristics is to not have small sample sizes in the first place.  If we assume that on average an employer will have a 90-2-2-2-2-2 split of ethnic categories, how large should a sample be before it is reasonable to allow non-statisticians to draw conclusions without statisticians like me screaming that the sample size is to small? 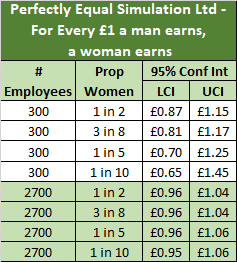 If we assume an minority ethnic category is on average 2% of a workforce and that 2% has to be a minimum of 100 employees, it is simple maths to arrive at the conclusion that the minimum threshold for reporting ethnicity pay gaps should be 5000 employees not 250 employees.

Out of 10,800 employers who submitted gender pay gap data for the April 2018 snapshot, only 559 stated they employed 5,000 or more employees.  It is likely that this figure could be increased if conglomerates were required to report a group figure as well as their data for each legal entity.  At the moment there is no requirement for group level reporting which is something I believe should be changed.

The other way to solve the small sample size issue is to only have ethnicity pay gap reporting in areas where ethnic minorities make up a large proportion of the population i.e. areas where white:non-white ratio is closer to 50:50 rather than 90:10. 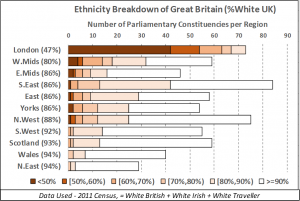 The table shown here summarises the 632 parliamentary constituencies in Great Britain based on the % of the population identifying as White UK as recorded in the 2011 census.  Parliamentary constituencies are a good geography to use since they are of roughly equal size and therefore can be averaged and aggregated.  When we group constituencies by administrative region, we immediately see that London has a large number of minority white seats (42 out of 78) whereas outside of London there are only 14 minority-white seats.

Since London has its own Assembly, it could be worth devolving the legislation to the Assembly for a 5 year period say to try EPG out on employers who are registered in London.  Given all the concerns I raised last year, this approach has the virtue of testing the feasibility of EPG and to see if my concerns are justified.  I take the view that if it doesn’t work in London then EPG is not going to work elsewhere in much whiter areas.

The difficulties with this option are numerous.  First there is the unsatisfactory aspect of singling out one region for an experiment.  Second, would employers be required to only report London based employees or all of their employees across the UK?  If the former, that would impose an additional burden on the employer.  Finally and most importantly, the London workforce is made up of a substantial number of commuters who live outside London in areas that are much whiter than London itself.  That means whilst the population of London is ethnically diverse, the workforce is less so and this may bring back some sample size issues.

Ethnicity pay gaps are already being measured and reported by the Office of National Statistics (ONS).  Why are these figures not sufficient and why are we asking employers to report EPG as well?  The answer is accountability and action.  We want employers to be motivated to address these pay gaps by taking action.  A single national statistic, whilst very robust statistically, is hard for individual employers to grasp and convert into actions.

I have demonstrated that small sample sizes are the bane of employer-level EPG so in this option, I argue that ethnicity pay gaps should be reported at industry sector levels instead.  The process would still involved employers processing their data but rather than submitting their data publicly, they would instead submit their data confidentially to an industry body who would compile the data and report the relevant statistics for the industry sector.  Note this does not prevent employers from voluntarily reporting their ethnicity pay gaps but it removes the requirement to publicly do so.

One thing I have noticed from my extensive analysis of gender pay gap data is that often employers in the same sector have similar pay gaps and issues.  This means that efforts to close pay gaps are likely to require industry level initiatives and accountability.  For example, in point 5 of my article “7 ways to misuse gender pay gap data”, I pointed out that the airline sector has large pay gaps since the pilot to cabin crew pay ratio is the prime driver of the pay gap and pilots are overwhelmingly male whilst cabin crew and mostly female.  Ryanair could try and poach female pilots from other airlines to close their pay gap but this just simply worsens the gaps elsewhere in the sector.  Until more women become pilots and get through the relevant training and career progression, airlines will have large pay gaps for many years to come.

If the solution to gender pay gaps are most likely to come from industry led initiatives, it makes sense to assume that closing ethnicity pay gaps will also require industry led initiatives.  In that case, I think more can be achieved by placing accountability on the industry rather than individual employers.  Provided the industry sector encompasses at least 20,000 employees say, the sample size issue should disappear completely and we should get better evidence on what works and what doesn’t work when trying to close a pay gap.  Note it is not necessary for industry sectors to be nationwide.  For some industries, they could also be split up by region as well e.g. Catering Wales, Catering North West, etc.

The biggest difficulty with this option is defining the relevant industry sectors and which employers sit in which sector.  Some employers cross over multiple sectors and therefore deciding who is in which sector will be problematic.  The obvious classifications to use are SIC (Standard Industry Classifications) codes but these are currently have many problems as I explained to the Treasury Select Committee last year when I tried to define the Finance Sector.

The second difficulty is ensuring a suitable body for the industry exists that is capable of collecting and processing the relevant data from all its employers.  This is not a simple task since employers will have to send employee level payroll data which immediately opens up issues of security and confidentiality.  That imposes a cost on the body which would have to be recuperated from its members.

I have listed the 5 options in order of ascending preference with options 1 & 2 my least preferred and option 5 my most preferred.

I appreciate that industry sector level reporting reduces employer level accountability but I just don’t think this is feasible with majority-minority characteristics since small sample sizes will inevitably crop up everywhere to undermine the reliability of the published data.  I am increasingly of the view that gender pay gaps will only be closed through industry sector led initiatives and I believe the same will apply to ethnicity pay gaps.  Finally I think that whilst the government will always be hesitant to place onerous burdens on employers who may lack the capacity to manage those burdens, I think industry sector bodies are in a better position to take on those burdens and find out what actually works.  As a result I think it will be easier to enforce accountability to close pay gaps.

After an entire meteorological year where the temperature above the median for ever single month, … END_OF_DOCUMENT_TOKEN_TO_BE_REPLACED

Sir Donald Bradman is the GOAT (Greatest of All Time) of sporting GOATs.  All cricket lovers accept … END_OF_DOCUMENT_TOKEN_TO_BE_REPLACED