The headline of the third quarter of 2018 is that the UK continues to be sluggish but going in the right direction.  There is no question, the economy needs a pickup soon to place itself on a stronger footing ahead of a rising probability of another recession in the near future. 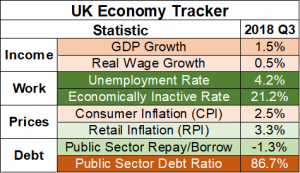 The top line picture of the UK economy is persistent low growth since the recession 10 years ago.  This has inhibited wage growth and the government’s ability to clear the deficit.  Inflation and unemployment is low but the debt ratio is too high and leaves the UK poorly placed should another recession strike soon.

Annualised GDP continues to be consistent with the last 8 years since the Great Recession i.e. sluggish.  Since the recession ended in Q1 2010, median GDP growth has been +1.8% vs +2.7% before then.  In effect, our economy has struggled to return to pre-recession levels of growth unlike the recoveries following previous recessions.  Something needs to happen to give the economy a kick up the arse!

The UK has had its first quarter of real wage growth for nearly 2 years.  Whilst welcome, this does not make up for the previous 10 years though it is worth noting that this is genuine growth rather than the more artificial growth seen in the 2015 & 1206.

It is worth comparing this chart with the Consumer Inflation chart in section 3a below.  That points to the apparent wage growth in 2015 & 2016 being entirely due to inflation being near zero rather than any sustained wage growth.  The disappearance of that growth over the last 2 years is due to inflation rising.  So one can make the case that real wage growth is effectively flat to negative ever since the 08/09 recession and that is most probably a result of GDP growth just not being good enough.

A small rise in the latest quarter should not obscure the fact that unemployment is at its lowest level since 1975 and the trend has been steadily downwards since the 08/09 recession.

Economic Inactivity continues to be at record lows.  So not only is unemployment low but most people are seeking work in the first place which really points to an economy more or less maxed out in terms of its labour pool.

I continue to track RPI since it allows you to place current inflation into a longer historical context than CPI.  It is however not a national statistic and it may be abolished at some point.

Government borrowing continues to fall as a % of GDP and at current trends, the government should be able to balance the budget by the end of next year.

The Debt Ratio is finally starting to fall as the budget deficit falls below GDP growth.  With higher GDP growth though, the debt ratio would start to fall quite quickly and would give the government more breathing space for a stimulus should another recession come soon.  If this doesn’t happen, we could be back in the same situation as 1980/81 when the government decided it could not afford to expand borrowing.

The chart above has a gap in 2001 due to missing data for wage growth but today our misery is below the median but it has been lower especially in the 10 years before the 08/09 recession.  The chart also shows that the 74/75 and 80/81 recessions were ultimately worse for us than the 90/91 and the 08/09 recessions.  Obviously not everyone’s memory goes back that far so it is possible that this chart is misleading.  But it does have the virtue of tying together the economic statistics that are directly related to our personal lives.  Perhaps the one statistic that could be added to this index is something about the tax burden but perhaps that might be the guest statistic next quarter!

Recently, a lot of people have been making incorrect claims about what a gender pay gap tells you.  … END_OF_DOCUMENT_TOKEN_TO_BE_REPLACED

The BBC presenter Samira Ahmed has won her claim for equal pay at the employment tribunal.  She … END_OF_DOCUMENT_TOKEN_TO_BE_REPLACED

On 5th February 2020, Baroness Prosser laid a bill in the House of Lords which calls for the … END_OF_DOCUMENT_TOKEN_TO_BE_REPLACED

January 2020 was the 6th warmest January on record. The met office has recently released data for … END_OF_DOCUMENT_TOKEN_TO_BE_REPLACED

The weather in the UK for December 2019 was completely unremarkable in all respects, yet again.  … END_OF_DOCUMENT_TOKEN_TO_BE_REPLACED

At 2200 on Thursday 12th December 2019, the BBC/ITV/Sky Exit Poll was revealed to the nation and … END_OF_DOCUMENT_TOKEN_TO_BE_REPLACED

Today, the UK votes in its 3rd general election in less than 5 years.  After serious polling errors … END_OF_DOCUMENT_TOKEN_TO_BE_REPLACED

Next Thursday, the UK will vote in its 3rd general election in less than 5 years.  After serious … END_OF_DOCUMENT_TOKEN_TO_BE_REPLACED