This is the second of my seat forecasts for the 2017 general election.  I have to be honest, it never occurred to me that I would be covering Kensington as that seems a straightforward seat to forecast.  However, Kensington now has the distinction of being the first seat to have a constituency poll published and the results provide an insight as to which might be the best forecasting model to use.

My first seat forecast was for the CON/LD battleground of Bath in the South West and in that post I describe my 3 forecasting models in some depth so please read that post if you are unfamiliar with these.  A reminder that the 3 models are: 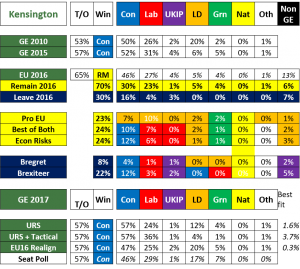 I have run these models and all 3 predict a comfortable Conservative hold.  In 2010 and 2015 the Conservatives held the seat with a 20%+ majority.

The regional trends are shown in more detail in charts R2 & R3 below.  Chart R2 is the same information as displayed for London in chart R1 of my Opinion Poll Tracker, R3 is the rolling 15 poll average for the London crossbreaks of all the polls.

Both my URS and URS+TacVote models predict an increased Conservative vote with a similar majority.  Whilst my EU realignment model is intended to be a sense check, this is forecasting a fall in the Conservative vote due to the very high Remain vote in 2016 and thus a larger pool of Pro-EU Conservatives defecting to the Lib Dems.

As far as I am aware, Kensington is the first seat to see a constituency poll which was carried out by Survation according to this tweet from BritainElects.  Straightaway, you can see that the projected Conservative vote is down on 2015 and in line with my Brexit realignment model.  If I used this model as my baseline instead of URS for the my tactical voting model, then the available tactical votes would be 23%.   If 75% of this goes to Labour as per my tactical vote model then the Conservatives will still hold on but with a considerably reduced majority.

So is this poll good news for the anti-Brexit message of the Lib Dems and the anti-Tory message of the “progressive alliance”?  At the moment, this answer is no.  I have not yet published a forecast using Brexit realignment but I can tell you that if this is the case in 2017, then whilst the Conservatives will do worse in London than expected they will do much better than expected outside of London and the end result will be an even larger Conservative majority.  For every piece of anecdotal evidence that a Lib Dem supporter collects that an anti-Brexit coalition can succeed, you need to also factor anecdotal evidence to the contrary such as this from a Conservative canvasser in Loughborough.

Finally a word of warning about constituency polls in general.  All parties love to play the game of “publishing” a constituency poll if the publisher is the party itself, they will invariably publish only the favourable polls and not publish unfavourable polls.  Also, distrust any poll where the data has not been made publicly available which is the case at present with this Kensington poll though Survation may publish the tables in the near future.  In 2015, Lord Ashcroft published a considerable number of constituency polls and it was these that gave first warning of the Tory tsunami that swept away the Lib Dems in the South West.  I am hoping that he will decide to repeat this exercise in 2017.

It was a warm and sunny March this year in the UK.  In fact it was the 2nd sunniest March on record. … END_OF_DOCUMENT_TOKEN_TO_BE_REPLACED