This post was first published on 29th April 2017 and predicted a narrow Conservative Hold.  I updated this post on 21st May 2017 to take into account latest data.

Welcome to the first of my constituency forecasts for the 2017 General Election.  I’ve chosen to start with the seat of Bath currently held by the Conservatives for two reasons.  First, it is where I live so I have a personal interest!  Second, it is the bell-weather seat for the Liberal Democrats when it comes to the success of the anti-Brexit strategy.  Fail to take Bath and they can kiss goodbye to any chance of making the election a success.

This seat is too close to call for reasons that will become clear. 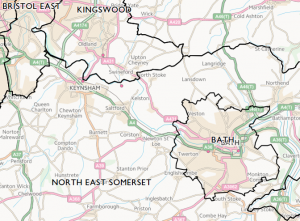 Let’s start off by looking at the history of the seat.  The Lib Dems first won this seat in 1992, unseating the Conservative party chairman Chris Patten, and by 2010 they had turned it into their 3rd safest seat.  Unfortunately, this wasn’t enough to protect them from the Tory Tsunami in the South West in 2015 and the Conservatives managed to regain the seat.  In 2016, Bath voted 66% Remain in the referendum making this seat one of the ultra-Remain seats in Britain i.e. it was the 50th most Remain comfortably putting it in the top decile.  Bath is in fact the most remain seat outside of the major cities.

Those of you who have seen my by-election predictions will be familiar with my use of the Lord Ashcroft “exit poll” to segment the referendum vote.  If you are not, then please read my by-election forecasting model post to familiarise yourself with the segments shown in the table.  I have made a few tweaks but the model is essentially the same.  Since Bath is an ultra-Remain seat, the pro-EU segment is much large than normal accounting for 21% of the electorate in Bath. 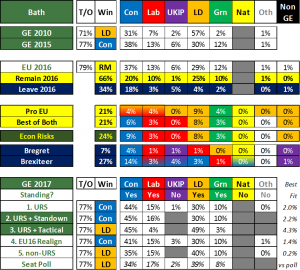 I will explain each model in turn.

My URS forecast is for a Conservative hold and an increased majority.  This is derived by adding the changes shown in Chart R2 below to the 2015 General Election results.  Chart R2 shows the main change predicted since 2015 is a UKIP to Conservative swing of 8% whilst the Lib Dems have made very little progress.  I suspect what progress they have made has come from Green voters switching to them in the South West.  Labour has made some gains in the South West since the election was called as shown by Chart R3 but it should be noted that the South West is Labour’s weakest region in any case. 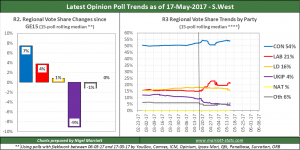 In Bath’s case, UKIP only had 6% of the vote last time around so a 9% fall in their vote would take them into negative territory.  To avoid this issue, every party has a floor vote beyond which it cannot sink in my URS model.  For the Conservatives, Labour and Lib Dems it is 5%, for UKIP and the Greens it is 1%.  Therefore in Bath, I have only used a 5% swing from UKIP to the Conservatives in my URS forecast.

My URS+S forecast is also for a Conservative Hold.  In Bath, both URS+S and URS forecasts are more or less the 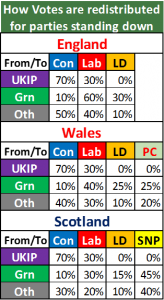 same since UKIP are the only party not standing in 2017 and they only had 1% of the vote in my URS forecast.  As explained in more depth in my North Norfolk forecast, URS+S is derived by first calculating the URS forecast and asking the question, what will the residual voters for parties not standing (UKIP in this case) do?  As shown in the table, I have made the assumption that 70% of UKIP voters will vote Conservative and 30% Labour.  The URS forecast is then recalculated by adding the reallocated voters in the proportions shown to the parties still standing.

Note that the Conservatives, Labour, Nationalists and Lib Dems are standing in every seat bar the Speaker’s seat of Buckingham and 2 seats where the Lib Dems have stood down.  Therefore, the only reallocations we have to worry about are for UKIP, Green and Others.

The one saving grace for the Lib Dems in Bath is that this is a seat where it does not need much tactical voting for them to win the seat.  If Brexit realignment is a reality, then the Lib Dems have no choice but to rely on tactical voting.  I have already seen some advice to voters on social media about where to cast tactical votes but from what I have read, there is a lot of wishful thinking going on and the potential gains to the Lib Dems maybe smaller than hoped for.

Let’s start with the 2015 results in Bath.  The premise of tactical voting is that Labour, Lib Dem and Green voters will be willing to support the party out of these 3 that is most likely to defeat the Conservatives.  If we add these 3 parties in 2015, we end up with a total of 55% which is an outright majority which is an easy win for such a “progressive alliance” with the Lib Dems being the beneficiary here.  If we assume that in 2017, there has been no swing since 2015 but Brexit is a major issue, then before we declare victory for the tactical voters, we have to ask what the Conservatives’ counter attack will look like.  It doesn’t take much to realise what it will involve, it will be a straight appeal to UKIP voters along the lines of “Look at the metropolitan liberal elites trying to sabotage Brexit! Vote for us to stop this“.  The polls show that this dynamic will work.

There are a myriad of permutations that can be played out but I have settled on the following Tactical Voting Model.

Using this model in Bath, with my URS+S forecast as my baseline, results in a URS+S+Tactical forecast of a Lib Dem gain.  From my URS+S baseline, you can see that the Labour & Green vote adds up to 25%.  UKIP has stood down in this seat and their vote has been taken into account in the URS+S forecast so the available tactical votes remains 25%.  The Lib Dems only need 14% of this chunk to win the seat and since I am using 75% of 25% equalling 19% as my tactical vote forecast, this means that tactical voting will result in a win for the Lib Dems.  However, if only 50% of the available tactical votes actually vote Lib Dem then the Conservatives will hang on just.

I consider this to be a well structured model because it incorporates a Conservative counter attack element.  I have yet to see on social media any appreciation of the need to account for the UKIP vote when trying to work out tactical options.  It is also unrealistic to assume that all Labour, Lib Dem and Green voters constitute single “progressive alliance” voting block.  Labour Leavers have been shown to be culturally conservative and if they are also present in large numbers in a constituency, they have the potential to scupper the success of tactical voting.

In Welsh & Scottish seats I am not including the SNP and Plaid Cymru in the “progressive alliance”.  In Scotland, I believe independence is the dominant narrative and there the SNP has to be considered separately.  In Wales, there may be a case for including Plaid in my calculations but for now I am excluding them.

4. EU16R – Brexit Realignment and what does this mean?

At this point, it is worth comparing my URS+S forecast with my EU16 Realign forecast.  You can see that in the case of Bath, there is a surprising amount of agreement between the two models.  My Brexit realignment model basically states what I would expect if the EU referendum was the only factor in the election and the electorate has realigned itself according to its Brexit vote.  The colours of the 5 referendum segments for each party show where I think the voters have realigned themselves and I want to explore these in more detail.

My realignments are based extensively on the data shown in the Switching charts S1, S2 & S3 in my Opinion Poll Tracker.

Similarly, the two defecting Labour segments cancel each other out more or less.  This therefore leaves the UKIP defectors as the remaining segment that drives the final 2017 estimate.

The reason I like to use the Brexit Realignment model is as a sense check on my URS forecast.  When the two are aligned, one can make the hypothesis that the regional swings are reflective of Brexit realignment among voters.  We already know from chart R1 of my Opinion Poll Tracker that in the South there is a straight swing from UKIP to Conservatives and decent swings to the Lib Dems especially in London.  In the North & Midlands, the Conservative swing is being supplemented by a swing from Labour.  Given that the Leave vote was highest in the North and Midlands, the case for the hypothesis that the regional swings reflect Brexit realignment is building.

At present, my official forecast remains URS but I will continue to track my Brexit realignment model.  Bath shows though that if this is the case, the Lib Dems stand to do badly and far from making gains they could end up losing seats.

My nURS model currently alters the URS forecast for the Conservatives based on the Leave vote and adds or subtracts the same votes from the nearest challenger to the Conservatives.  This has the effect of allowing for a degree of tactical voting as well.

Last week, my local newspaper published a poll supposedly taken for the Bath constituency.  I am unable to verify the robustness of this poll and I suspect it was a poll of the paper’s readers rather than the constituency’s voters.  Mark Pack has published a warning saying that the publisher of this poll are not robust in their methodology.  Saying that, it is noticeable from the table earlier in this post where the poll’s results are shown that these are pretty much bang on the nURS predictions.

I strongly suspect that my final official forecast will be based on the nURS model since it incorporates a Brexit effect which I do see in the polls plus an element of tactical voting.  However, there has been a dearth of constituency or sub-regional polls and until I see more of these to allow me to calibrate this model, I intend to use this model as a sense check rather like my Brexit Realignment model.

I believe in the potential of my nURS model and therefore I have decided to take the seat poll for Bath at face value and change my forecast to a Lib Dem Gain.  Obviously the seat is still marginal and I may yet change my mind again,

I find the Bath seat fascinating because it has the potential to be the bell weather for the Lib Dems in this election.  As my calculations show, tactical voting is essential for a Lib Dem gain.  For all the talk about the prospects of a “progressive alliance”, I think the reality will be less than their supporters hope for.  My position remains the same as I said last year, Bath is a must win for the Lib Dems.  Fail to take it and they will be doomed to being a small party with representation only in London and major cities.

The 5th warmest July on record included a new record temperature of 40.3C on 19th July.  It was also … END_OF_DOCUMENT_TOKEN_TO_BE_REPLACED

We've now had 3 months of extremely boring weather in the UK!  It's not doing the UK's reputation … END_OF_DOCUMENT_TOKEN_TO_BE_REPLACED

"I mentioned it once but I think I got away with it!" Basil Fawlty didn't get away with it in … END_OF_DOCUMENT_TOKEN_TO_BE_REPLACED

May 2022 was the 5th warmest May on record in the UK.  Whilst temperatures are rising as the days … END_OF_DOCUMENT_TOKEN_TO_BE_REPLACED