Meteoologists define winter in the UK to be the period from December to February so winter is now over and we are officially in spring.  The 2018 winter was very sunny but this hides the fact that our winter climate has changed quite notably over the last 25 years.

I analyse the long term trends in the UK weather using a statistical tool known as Standardisation.  This means that the 3 key variables of Temperature, Sunshine and Rainfall are recalculated so that they all have the same units, which is number of standard deviations from the mean.  Such variables are known as Z-Scores which by definition will have a mean value of 0 and a standard deviation of 1.  For more information on how I have done this, please read my post on trends in the UK summer of 2017.

Standardised variables aid interpretation of data in many ways.  If the standardised value is positive, it means that the value is above your average or expected value.  If it is negative, then the value is below your expected value.  If the original variable is approximately normal in its distribution then the vertical scale gives us an idea of how typical or atypical each year is.  Z-Scores in the range -1 to +1 are considered typical values and completely unremarkable.  Z-scores in the ranges -2 to -1 and +1 to +2 are considered to be uncommon values but still entirely plausible and such values should not cause us concern.  When Z-Scores get into the ranges -3 to -2 and +2 to +3, we should start paying closer attention and asking ourselves if something has changed especially if we get a sequence of successive points in these ranges. Finally, if the Z-scores are less than -3 or greater than +3, that is normally regarded as a clear call to action.  There are in fact many ways of interpreting Z-Scores and what I have said so far merely a gives an overview of the most basic interpretations.  A whole field of study known as Statistical Process Control (SPC) is dedicated to building and interpreting such charts (known as a CONTROL CHART).

For the winter of 2018, the z-scores for temperature, sunshine and rainfall were respectively -0.2, +2.2 and -0.1.  Officially this means the winter had normal temperature and rainfall but much more sunshine than normal.  If you have been following my monthly weather tracker then this should be no surprise as all 3 months showed a similar picture.  Obviously in the winter, the extra sunshine doesn’t actually add to that many hours per day so you may not have noticed this.

This clearly shows a shift in our winter climate over the last 100 years of almost 1 standard deviation.  Recall that the baseline for the z-score calculation is based on the idea of “living memory” which I have defined to be the last 50 years of 1968 to 2017.   We can characterise our winters broadly as follows:

So clearly 2018 is completely consistent with the recent climate period.

How many dimensions does Winter have?

A further point may be apparent from the above chart.  The z-scores for temperature, sunshine and rainfall all appear to be correlated.  In fact this is somewhat illusory as the above chart uses moving averages.  If we look at the actual z-scores, we can see what the correlation is in the 3 scatter plots below.

The brown square in each chart is 2018.  Scatter plots can be useful to identify unusual years that do not follow the normal relationships.  Here we see that the two charts containing sunshine show 2018 on the edge of the historical scatter of points. However, let’s be honest, sunshine in winter is not we remember about winter weather.  What we remember is temperature, rainfall and frost/snow.   The scatter of temperature and rainfall shows 2018 bang in the middle of the historical scatter which makes the winter of 2018 completely unremarkable.

The temperature V rainfall scatter plot shows that in the winter, these two variables are positively correlated.  When the rainfall z-score is positive, the temperature z-score is much more likely to be positive and vice-versa.  Neither rainfall and temperature is correlated with sunshine in the winter though.  A statistician would look at these 3 charts and say that what looks like 3-dimensional weather (temperature, rainfall, sunshine) is actually closer to being 2-dimensional.  One dimension is sunshine, since this is not correlated with rainfall/sunshine, and the other dimension is a combination of temperature and rainfall.  A simple way to show this is to create two indexes which are called Components by statisticians as follows:

The division by the square root of two is a mathematical necessity which I won’t explain yet.  What is more interesting is to plot the correlation between C1 & C2.  As you can see the 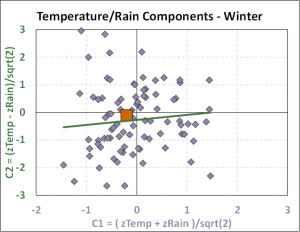 correlation is virtually zero which is to be expected since in essence we have turned the temperature Vs rainfall chart through 45 degrees.  The chart here actually shows over a hundred years of data but had I just used data for 1968-2017, the years I used to calculate the means and standard deviations used in the z-score calculations, then the correlation would be exactly zero.  What this means is that any two correlated variables can be converted into two independent non-correlated variables by using the component method above.

What I have described here is one of the basics of a vast area of statistics known as dimensional analysis, a subset of a wider area known as multivariate analysis.  The idea is to take a n-dimensional dataset which is hard to visualise in our 3-dimensional world and even harder to visualise in our 2-dimensional computer screens and books and identify the “true” or “effective” number of dimensions that still capture the essential features of the original n-dimensional data.  One way to measure the “true” dimensionality of our weather data is to calculate the square of the standard deviations (known as the variance) of the two components.  The higher the variance, the more of the original dataset that is being captured by the components.

In the case of our two components, the variance of C1 is 1.5 and the variance of C2 is 0.5.   Notice that the sum of these two numbers is 2, the number of variables that were included in the component calculations i.e. temperature and rainfall.  It is the division by the square root of 2 in the calculations of C1 & C2 that gives us this result.  What this means is that when we consider rainfall and temperature together in the winter, 3/4 of the total variance in two dimensions can be captured by a single dimension C1 that is a specific combination of the two variables.  If we now bring back in the z-scores for sunshine where the variance is 1 and rename this component C3, you can see that the 3-dimensional data set for winter can be reduced to effectively just two dimensions C1 (with variance 1.5) and C3 (variance 1).  Together they account for 2.5 of the dimensions from the original 3 dimensions.  The 3rd component C2, accounting for half a dimension, can then be discarded as “noise” and further analysis can be focused on just C1 & C3.

If you look back at the calculations of C1 & C3, you might ask if other components could be calculated that would result in C1 having a variance higher than 1.5 i.e. it captures even more of the 3-dimensional dataset?  Can C1 not also include sunshine, etc?  The answer yes it can and in fact an infinite variety of components can be calculated.  Naturally, this calls for some method that distinguishes between the various options and chooses an optimal solution and in my next post on weather trends for Spring 2018, I will repeat what I have done here using a method known as Principal Components Analysis (PCA).

After an entire meteorological year where the temperature above the median for ever single month, … END_OF_DOCUMENT_TOKEN_TO_BE_REPLACED

Sir Donald Bradman is the GOAT (Greatest of All Time) of sporting GOATs.  All cricket lovers accept … END_OF_DOCUMENT_TOKEN_TO_BE_REPLACED