Here is my forecast for the election that was not supposed to be happening in the UK.  The Brexit Party is well on course to be the largest party and could even set the record for the best ever vote share by a party in the d’Hondt era of EU elections in the UK.  At the same time, the Liberal Democrats have the possibility of beating both the Conservatives and Labour parties in a UK-wide election for the first time since 1906. 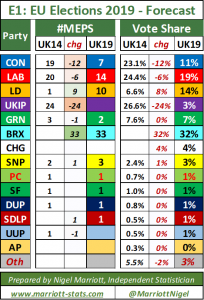 The Brexit Party are clear favourites to top the poll with 32 MEPs out of a total of 73 MEPs on a UK vote share of 32%.  As shown in table E1, they would be 5 MEPs short of a majority.  They would take over from UKIP as the UK’s largest party in the EU Parliament with UKIP losing all of their MEPs but there is no question that much of the UKIP support has simply switched to the Brexit Party especially since Nigel Farage was the leader on both occasions.

Labour and the Lib Dems are currently vying for second place with Labour favourites to do so.  Regardless of who comes second, the parties are already interpreting the outcome differently.  For Labour, EU19 could be their second worst EU election performance (beaten only by 2009).  For the Lib Dems, EU19 will be a welcome recovery from a disastrous 2014 but it should be noted from chart E2 that at present they are merely on track to match their historical performances.  The same goes for the Green party which is only expected to match their 2014 performance. 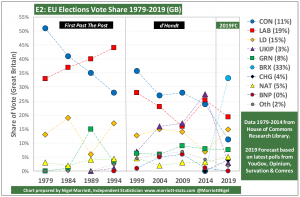 The biggest loser by far though is the Conservative Party which is expected to come 4th with only 10% of the UK vote and lose the majority of their MEPs.  Indeed there is the possibility of their vote share being in single figures which would be quite something.

How does the d’Hondt election system work?

Chart E2 shows that all elections since 1999 have used the d’Hondt voting system instead of the First Past The Post (FPTP) used in General Elections.  Voters vote for a party and depending on which election region they live in, their vote goes towards electing anything between 3 & 10 MEPs in their region.  To demonstrate, I will use the London region 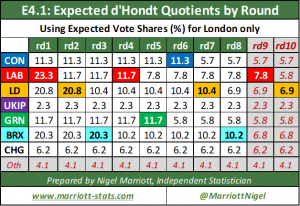 which elects 8 MEPs and the outcome is shown in table E4.1.

D’Hondt works by undertaking X rounds of counting where X is the number of MEPs to be elected.  In round 1, the total number of votes is counted for each party and in table E4.1, I am showing the votes as % vote shares based on the latest polls.  Labour is currently expected to top the poll with 23.3% but the Lib Dems and Brexit Party are close behind with just under 21% vote share.  Since Labour have come first, they win an MEP in the 1st round.

Then we move to round 2.  At each round, the parties’ Quotient is calculated which is equal to number of votes won divided by 1 + number of MEPs won in previous rounds.  Since Labour won an MEP in round 1, their vote is now divided by 1+1 = 2 hence their quotient is now 11.7%.  The quotients’ for all other parties remains the same since we are dividing their votes by 1.  The Lib Dems now have the highest quotient in round 2 so they win an MEP. 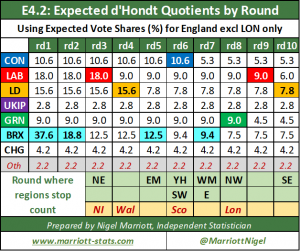 The numbers of MEPs each region elects is shown at the bottom of table E4.2.  The vote shares in this instance is for all of England outside of the London region and is also based on latest polls.  I will explain the significance of the EngXL (England excluding London) geography later on in this post but this table shows that the North East and Northern Ireland are the smallest regions with only 3 MEPs each whilst the South East is the largest region with 10 MEPs.

One day, I intend to write a series of blog posts about election systems but I am in favour of the UK switching from FPTP to a 3-Member Open List d’Hondt system.  You can read more about this system in this article I wrote following the 2015 UK General Election.

What are the Polls saying?

To make an accurate prediction of the number of MEPs per party, we need to know each parties’ vote share in each of the 12 UK regions.  More than that, we need to know the order of the parties in each region.  Traditionally opinion polls have concentrated on estimating vote shares at the GB level but this is not particularly helpful for an EU election.  Most polls do publish a breakdown by geography but the sample sizes can be quite small in some cases making it difficult to trust the results. 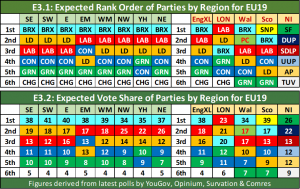 Tables E3.1 & E3.2 show my interpretation of the polls by region.  E3.1 shows the expected order of the parties and E3.2 the expected vote shares for the top 6 parties.  It is not difficult to see from table E4.1 earlier that to stand any real chance of having MEPs elected, you really need to be in the top 3 or 4 parties to have a good chance.  Parties that come 5th will very rarely win MEPs.

London, Wales (twice), Scotland & Northern Ireland are all lucky to have had polls specifically for that region.  This is very helpful for us forecasters but the other regions in England outside of London (what I call EngXL) are not so fortunate.  They have to rely on regional crossbreaks from the standard polls which are much more prone to error as I found to my cost in the 2017 General Election.  However, YouGov has carried out at least 1 large poll for HopeNotHate which gave separate estimates for each EngXL region based on much larger than normal samples so that is helpful.

To derive the figures in table E3.2, I have taken a weighted average of region-specific polls and averages of regional crossbreaks as follows:-

For London, Wales, Scotland and Northern Ireland, I was happy enough to use table E3.2 to derive my prediction of #MEPs under the d’Hondt system.  For EngXL, I was not happy to do so though I did use the figures in E3.2 as a sense check against my alternative method.

How I estimated vote shares for England XL

I am happy with my estimate of the vote shares in table E3.2 for EngXL as a whole.  These are based on the latest polls where I took the GB figures given and subtracted the Welsh, Scottish and London votes to arrive at the EngXL figures.  I am struck by the fact that outside of London, the Brexit Party appears to be on course to win almost 40% of the vote, a remarkable figure for a new party and one that is not getting enough attention in my view in the media.

All 4 pollsters in E3.2 have published breakdowns based on whether respondents voted Leave or Remain in the 2016 EU Referendum.  Since I am now only interested in estimating English regions, I excluded the Nationalist parties’ votes and recalculated these estimates.  I then averaged across the 4 pollsters to arrive at the figures shown in E5.

I should state here that the figures in E5 are in fact adjusted for Remain voters.  The Lib Dems & Green vote shares for Remain are roughly 3pts higher for each party than the average of the 4 pollsters and the Labour & Conservative vote shares are 3 points lower than the average.  This was necessary to achieve the calibration I describe below.

One of the lessons I learned from my 2017 General Election debacle was that I had a clue in my hand that the regional crossbreaks were incorrect had I paid more attention to the 2016 vote.  I have decided to apply that lesson here and use table E5 to estimate the votes for each party in each counting area of each region.  I can do this, because we know what the official results were for each of the 294 counting areas in EngXL.  To arrive at my estimates for each EngXL region, I followed these steps which I will illustrate for the Brexit Party in table E5.1 for 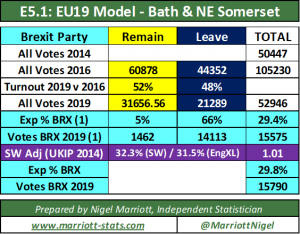 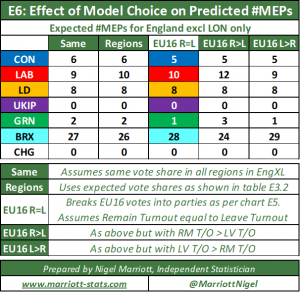 The beauty of this model is that it allows for explicit turnout modelling between Leavers and Remainers and to see how sensitive the results to variations.  Table E6 shows a variety of results for the number of MEPs won in EngXL and it is the two scenarios on the right that are of most interest.

Starting from the left, we have a very simplistic model which assumes same vote shares in all EngXL regions which is not going to happen.  The Regions scenario uses the vote shares from the polls as listed in table E3.2 above.  Remember this is what I have done for London, Scotland, Wales & N.Ireland but I stated I was not prepared to rely on regional polling figures for EngXL.

Together this shows that the sensitivities are mostly one way.  There is not much upside for the Brexit Party if Leave voters turnout more than Remain voters but there is quite a lot of downside if Remain voters really turnout.  Therefore Remain parties should go all out to get their vote out and if they beat the Brexit Party in this endeavour they could reap some rewards.

My Official Forecast by Region

Table 8 puts my EngXL forecast alongside the other regions in a single table.  For some candidates this could be good news.  I recall the 5th placed Brexit Party candidate in the South East list saying he might not get elected but as things stand he could very well be elected.

If you would more details of my model and forecast then please do get in contact and I will do my best to oblige.

Overall the results were basically in line with my R>L scenario.  Yes the Lib Dems did better than expected and Labour worse than expected but this can be explained as a shift within a putative “Remain Consortium”.

I reviewed the results against my forecast in these two tweets –

UK Inflation has risen sharply since the start of 2022 and dominates the media and politics today.  … END_OF_DOCUMENT_TOKEN_TO_BE_REPLACED

Rishi Sunak is the UK's first Prime Minister from a non-white ethnic minority. Did this happen by … END_OF_DOCUMENT_TOKEN_TO_BE_REPLACED

The weather in the UK for October was warmer and sunnier than normal.  Overall we are heading for … END_OF_DOCUMENT_TOKEN_TO_BE_REPLACED

The weather in the UK for September was unremarkable.  Perhaps that is a welcome change after the … END_OF_DOCUMENT_TOKEN_TO_BE_REPLACED

The 2022/23 Women's Super League (WSL) kicks off this weekend in England.  After the Lionesses … END_OF_DOCUMENT_TOKEN_TO_BE_REPLACED