Rishi Sunak is the UK’s first Prime Minister from a non-white ethnic minority. Did this happen by accident or were the Tories working towards this day over the last 20 years?

A recent article in the Sydney Morning Herald by an Australian journalist Latika Burke argues it was the latter. This is well worth reading because it goes into some depth about what the Conservatives did to get to this position.  When I combine this article with what I have said before about closing pay and representation gaps, I consider the Conservative party to be a valuable case study for any employer who wishes to close their gaps.

How the diversity of Conservative MPs changed between 2001 & 2019

All election and diversity data shown in the 2 charts below come from the House of Commons Library (who source ethnicity data from Operation Black Vote).  You can download a PDF file and a spreadsheet both of which contain a section on the personal characteristics of MPs.  For ethnicity, I added a line showing the percentage of the population from ethnic minorities in the seats won by the Conservatives in each election which is derived from the 2011 ONS Census by parliamentary constituency. 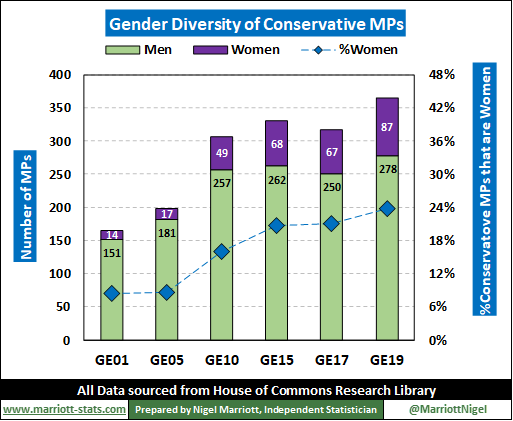 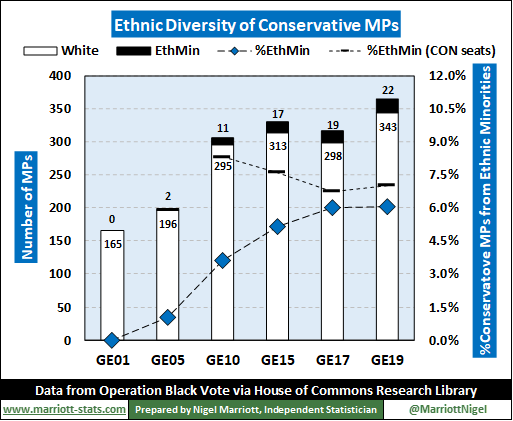 In her Sydney Morning Herald article, Latika listed 3 reasons for the change in diversity.

4 Points I would add to the article

Points made by other people

There have been a number of articles written and I may add to this list but these two are definitely worth reading.

Conservative MPs are not Intersectional either

Intersectionality is the trendy term used for what statisticians describe as the Interaction between gender and ethnicity.  For example, women make up 24% of Conservative MPs today but does that percentage differ for white and ethnic minority MPs?

Unfortunately, the House of Commons Library data does not break down MPs by gender and ethnicity so instead I used the photo 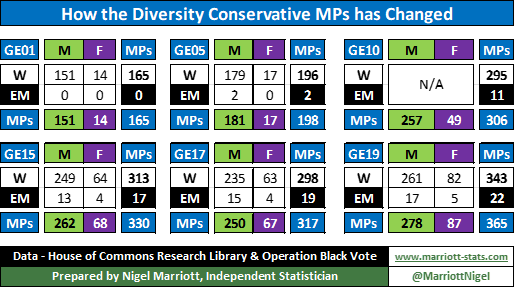 listings provided by the House of Commons (2015 intake, 2017 intake, 2019 intake) to count the number of Conservative MPs that appear to be female from an ethnic minority.  Once counted the other breakdowns can be worked out.  Of course, it is possible I may have made errors doing this so please let me know if I have.  As you can see I have been unable to locate data for the 2010 intake.

After the 2019 election, 24% of white Conservative MPs were women and 23% of ethnic minority Conservative MPs were women.  In other words, the percentage does not appear to vary by ethnicity and therefore a statistician would say there is no interaction between gender and ethnicity.  In modern trendy language, we say they are not intersectional and this was also the case after the 2015 and 2017 elections.  A simple 2×2 Chi-squared test for independence between ethnicity and gender shows no sign of any intersectionality.

What can employers learn from the Conservatives?

The Conservative Party has changed over the last 20 years from one that was overwhelmingly white male to one with essentially no gender and ethnicity pay gap.  As I have repeatedly explained in my blogs, a pay gap exists when a certain gender or ethnicity is more likely to be found in either the lower or upper part of the pay scale.  The 2 female and 1 Asian leader out of the last 7 leaders since 2001 is reflective of what is also seen in the cabinet and MPs (and party staff) so gender and ethnicity are now irrelevant in terms of the likelihood of how far an MP can climb the greasy pole.

When it comes to overall representation, Conservative MPs are almost representative of the ethnicity of their seats.  I specifically focus on the seats won by the Conservatives which are more likely to be outside of city centres so as to treat the party as an analogy for an employer based in predominantly rural areas say.  Such areas and seats tend to be whiter so given this is where the party actually “works” in the sense of MPs representing their constituents, the 6% of MPs from ethnic minorities is not far off from the 7% ethnic minorities found in those seats.  From the chart I showed at the start, you can also see the seats the Conservatives hold today are slightly whiter than those held in 2010.  Like an employer who moves their operations out of their city premises, the Brexit realignment effect (largely driven by class and education) has seen the Conservatives lose seats in cities but more than gain them in small towns and is demonstrated by the PCA map below which is explained in my article “Keir Starmer’s train to Downing Street“. 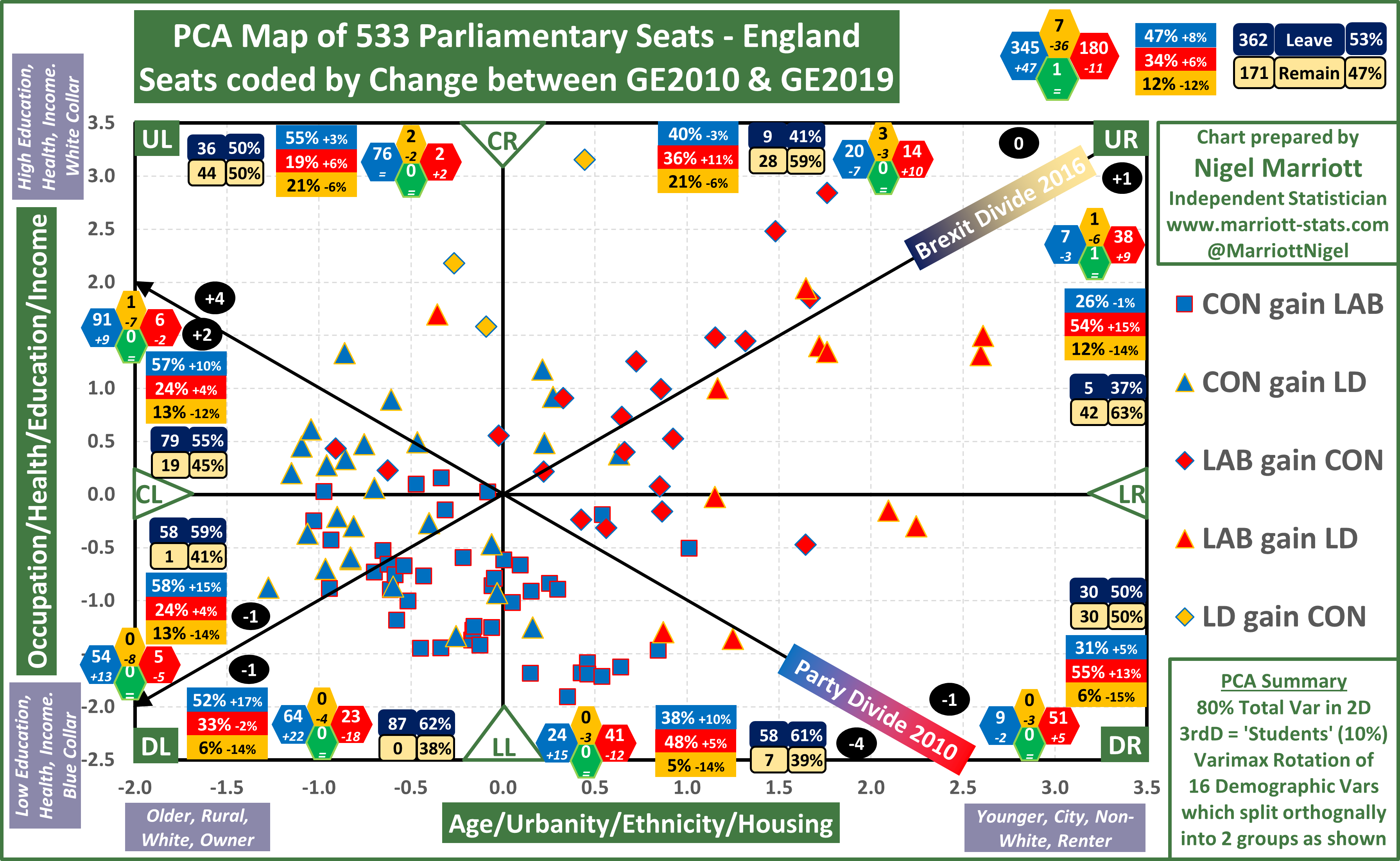 There remains an overall gap with women who only account for a quarter of MPs.  However, progress is still going in the right direction and it is worth noting this progress has been achieved without the use of all-women shortlists used in the Labour party.  One thing I think the Conservatives have got right is allowing the local party associations to make the final decision on who is their candidate.  That increases ownership of the whole process by the whole party and means the diversity drive is not just some purpose washing by head office which goes nowhere and ends up making things worse.  As I said before, the progress has been sustained despite major changes in leadership and strategy.

Of course, a factor helping with widespread party buy-in is that improved diversity among MPs was accompanied by electoral success.  Since 2001, the number of MPs has more than doubled, the national vote share is up 12 points and the Red Wall was smashed in 2019 with the party winning seats that have never had a Conservative MP.  All this means the increased numbers of female and ethnic minority MPs has not been at the expense of white men.  Given the historical highs in vote shares the Conservatives had in 2019 and the very bad opinion polls as of today, the Conservatives are likely to lose a lot of seats at the next election.  That will be a big test of the diversity strategy followed by the party, will such losses be accompanied by a fall in the percentage of MPs that are women or from ethnic minorities?  Will some people blame the losses on the diversity strategy?

Is it possible for employers to replicate what the Conservatives have done?  The most interesting idea for me is the A-list concept which might be possible to replicate in some employers.  The equivalent would probably be a head office function whose sole job is to compile lists of potential candidates who are diverse and representative and to make all of them aware of any vacancies arising.  The hiring managers would then only recruit from that list and would have the knowledge that a lot of the pre-screening and admin details have been taken care of.  I think ideas like this already take place internally e.g. a graduate fast stream, but this would extend the concept to an external pool.  You might argue that recruitment consultants could be doing this for their clients but I wonder if a central function within an employer focusing on maximising the diversity of the pool of potential candidates is a better way as it could be more resilient as leaders and strategies change.  So far, it’s clearly working for the Conservatives.

Please do leave your comments on either of these LinkedIn  or Twitter threads.

— Why I write these case studies —

My case studies explore good and bad practice with gender pay gap analysis and highlights what can be learned from them.  Closing a national pay gap can only happen if change happens within individual employers in the first place.  In the front line of such change will be the HR department who in my experience find basic statistics a struggle and so I hope they find these case studies illuminating.

UK Inflation has risen sharply since the start of 2022 and dominates the media and politics today.  … END_OF_DOCUMENT_TOKEN_TO_BE_REPLACED

Rishi Sunak is the UK's first Prime Minister from a non-white ethnic minority. Did this happen by … END_OF_DOCUMENT_TOKEN_TO_BE_REPLACED

The weather in the UK for October was warmer and sunnier than normal.  Overall we are heading for … END_OF_DOCUMENT_TOKEN_TO_BE_REPLACED

The weather in the UK for September was unremarkable.  Perhaps that is a welcome change after the … END_OF_DOCUMENT_TOKEN_TO_BE_REPLACED

The 2022/23 Women's Super League (WSL) kicks off this weekend in England.  After the Lionesses … END_OF_DOCUMENT_TOKEN_TO_BE_REPLACED