This is the third of my seat forecasts for the 2017 general election and my first for a Welsh seat.  By co-incidence the second Welsh Barometer poll was published today so I am able to explore this seat using a Welsh specific poll. 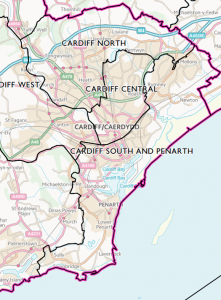 My first seat forecast was for the CON/LD battleground of Bath in the South West and in that post I describe my 3 forecasting models in some depth so please read that post if you are unfamiliar with these.  A reminder that the 3 models are:

I have run these models and all 3 predict a Labour hold but with a very narrow majority of 1%.  What was a safe Labour seat with a 16% majority in 2015 is now a key marginal.  Interestingly, there is little opportunity for tactical voting in this seat, it is now a straight Labour v Conservative fight. 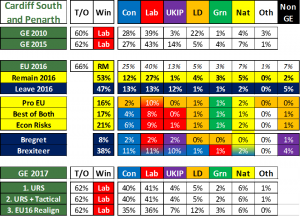 Had I written this post before the latest Welsh barometer poll, then I would have been predicting a Conservative Gain with a majority of 5%.  However over the last week, Labour has narrowed the gap on the Conservatives in Wales as can be seen in chart R3 below.  A week ago, the Conservatives had an 11% lead over Labour but this is now 6% which is a still a dramatic situation for Wales.  If this comes to pass, it will be the first time in a century that Labour has failed to top the poll in Wales at a General Election.

Chart R2 is the same information as displayed for Wales in chart R1 of my Opinion Poll Tracker, R3 is the rolling 15 poll median for the Welsh crossbreaks of all the polls. 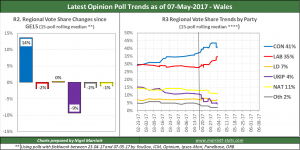 Is a non-Uniform Regional Swing apparent? 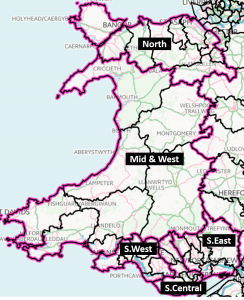 One criticism of my URS model is that it is probably unlikely that the swing will be the same in every seat in Wales.  Seat to seat variation is much more likely and my tactical voting model allows this to happen where the “progressive alliance” is expected to outnumber UKIP which is not the case in this seat.  The Welsh Barometer poll however contained some additional information that gives a clue as to what a non-Uniform Regional Swing might look like and I am sure you will not be surprised when I say that Brexit is the key!

Elections to the Welsh assembly uses the same 40 constituencies for UK elections but in addition, 20 members are elected through the d’Hondt system.  This is done by splitting Wales into 5 regions as shown in the map and electing 4 members per region.  The Welsh Barometer poll uses the same regions to provide a regional crossbreak of Welsh voting intentions and these are summarised in the table below.

wn by the dark blue column.  So for South Central (which includes Cardiff South & Penarth), the Leave vote was 6% lower than for Wales as a whole.

I have then listed the Conservative vote share in the 2015 General Election and then two estimates for the 2017 General Election.  The URS one is my Uniform Regional Swing for Wales which from chart R2 above is +14% which when added to the 2015 figures gives the 2017 estimates as shown.  The second 2017 estimate is the sub-regional cross breaks from the Welsh Barometer Poll (WBP).  As you can see there is a difference and the last column in green shows the difference between WBP & URS.  In South Central, WBP gives an estimated Conservative vote share which is 5% lower than the URS estimate.

So the sub-region least likely to vote Leave is the sub-region least likely to vote Conservative in Wales.  Recall that an earlier Barometer poll was published on 25th April and it was then that I first performed these calculations.  By plotting the DEV column (dark blue) for the Leave vote deviation against the difference between WBP & URS on a scatter plot we see that overall there appears to be a good relationship. 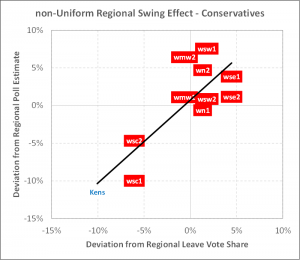 Note I have labelled the points with the sub region (WSC is Wales South Central) and a number denoting which Barometer poll it refers to, the first one in April or the second one today.  There is also one additional point I can add which is for the Kensington constituency (KENS) since that has had a constituency level poll published.

The overall correlation coefficient is +0.74 and the slope of the fitted line is +1.1.  So for every additional 1% Leave vote in a seat, the Conservative vote share will be 1.1% higher than predicted from URS.  In the case of Cardiff South & Penarth, the Leave vote was 6% lower than the Welsh total so using this relationship, the Conservative vote would be 6.6% lower.  Of course, if their vote is lower by this amount, the vote for another party will be higher.  As yet, I haven’t worked out what is the best way to reallocate the votes using this method but clearly in the case of Cardiff South & Penarth, this non-Uniform Regional Swing would make the seat a comfortable Labour hold.

I am intrigued by the potential of this effect but I would want to have more sub-regional and/or constituency polling before I turned this effect into a prediction model.  I have tried a basic model out and so far the effect appears to be similar to my Brexit realignment model in that whilst a number of seats would see lower Conservative votes and fewer gains, these would be outweighed by more gains among the Leave seats.  I will update this post once I have a model that I am willing to share.

UK Inflation has risen sharply since the start of 2022 and dominates the media and politics today.  … END_OF_DOCUMENT_TOKEN_TO_BE_REPLACED

Rishi Sunak is the UK's first Prime Minister from a non-white ethnic minority. Did this happen by … END_OF_DOCUMENT_TOKEN_TO_BE_REPLACED

The weather in the UK for October was warmer and sunnier than normal.  Overall we are heading for … END_OF_DOCUMENT_TOKEN_TO_BE_REPLACED

The weather in the UK for September was unremarkable.  Perhaps that is a welcome change after the … END_OF_DOCUMENT_TOKEN_TO_BE_REPLACED

The 2022/23 Women's Super League (WSL) kicks off this weekend in England.  After the Lionesses … END_OF_DOCUMENT_TOKEN_TO_BE_REPLACED