The 2022 calendar year was the hottest year on record in the UK beating the previous high recorded in 2014.  Does that mean that the UK is starting a new warming phase?  Using a technique known as a Control Chart, I show the answer is “Not Yet“.

For the first time on record, the annual average 24-hour temperatures across the whole of 2022 and the UK exceeded 10 degrees Celsius.

All temperature data shown in the chart below can be downloaded from the Met Office.  I plotted the UK annual average temperature for the calendar years (not the meteorological year of December to November) going back to 1884 as purple dots.  The solid black line is the 11 year Centred Moving Average (CMA) which is intended to represent the underlying trend 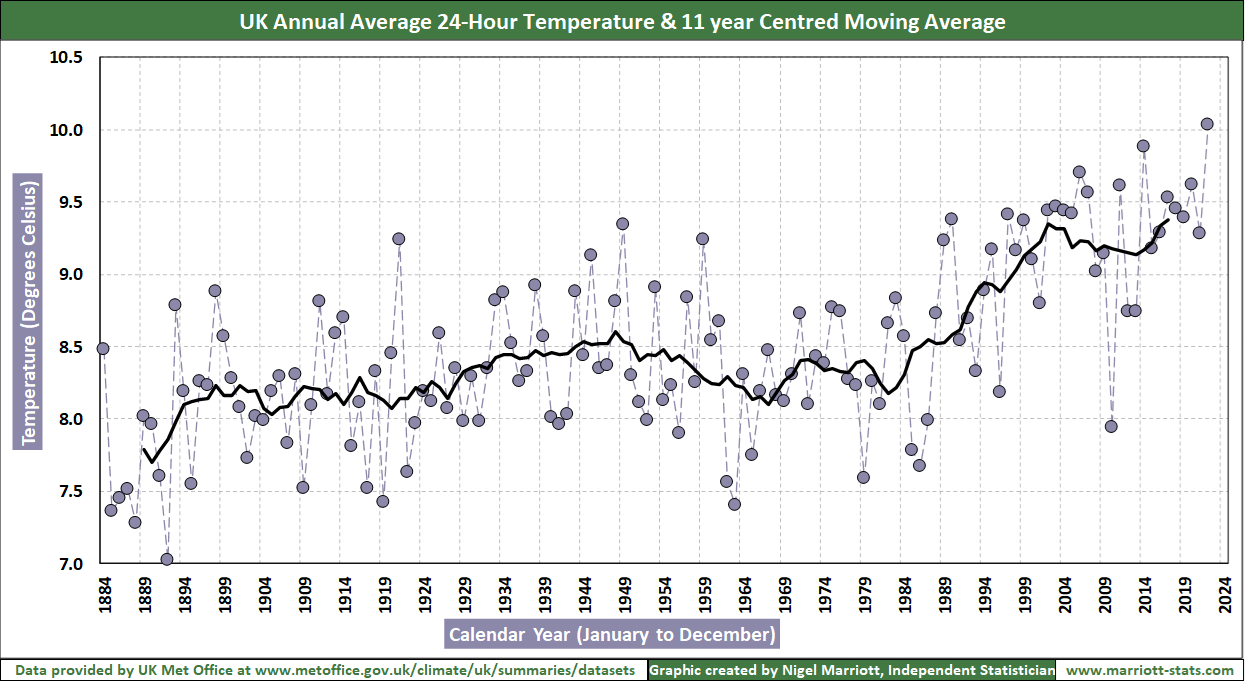 The 11 year CMA shows the following –

Before we can decide if a new trends has begun, we need to identify the current trends.  When I look at the chart above, I would characterise the late 80s/90s period as a Step Change between two time periods that were relatively flat before and after the step change.  Given the 1982 CMA covers the years 1977-1987 and the 2002 CMA covers the years 1997-2007, I regard the step change period to be the 9 years from 1988 to 1996.  I will ignore these years going forward and compare the following two time periods.

The choice of the number of years in era B is an arbitrary 3 times the number of years in era A.  Notice I’ve left out 2022 from the After era because I am trying to see if it is exceptional relative to the 25 years of this era.  Before I do that, I will note that a simple 2-sample t-test of the difference between the means m2 & m1 of eras A & B results in a t-statistic of 9.36 (p-value 0.000) which is overwhelming evidence of a significant step change taking place between the two eras.

The method I will use to evaluate 2022 comes from a field of statistics known as SPC (Statistical Process Control) and is known as the Control Chart.  A control chart can be used if the following conditions are satisfied –

These conditions are satisfied for the 25 years of the After era A.  If you would like to know more about why I can I say this, then please book a place on my training course “Identifying Trends & Making Forecasts” which will cover all of the points raised in this article in more depth.

The control chart for the After era is shown below.  The purple dots are the actual years with 2022 shown as a large square to indicate that year was not used to calculate the control limits (the 5 brown lines).  The 5 control lines (from top to bottom) are calculated as follows using standard SPC rules –

The average temperature in 2022 was 10.03 degrees Celsius which is just below the Upper Warning Limit (UCL2) of 10.07.  Standard SPC rules (but there are many variants) would consider the following outcomes for 2022 and any future year as a significant indicator that something has changed –

SPC rules are not cast in stone and there are many variants.  However, they do offer a fairly robust method of detecting changes which are widely used in many industries.  For 2023, if the annual average ends up greater than the target value of 9.27, I would take that as an indication that a step change up has taken place.  If it ends up below, then I would say there is not yet evidence of an upwards step change despite 2022 being the warmest year on record.

The BBC has just published an article on the exact same topic here!  This is an opportunity for you to compare my article with the BBC and to let me know which one you think is better.  I have set up a Twitter poll and a LinkedIn poll where you can vote and comment.  I would be grateful if you could spare the time to give me feedback on which one you think is the better article and why.

After an entire meteorological year where the temperature above the median for ever single month, … END_OF_DOCUMENT_TOKEN_TO_BE_REPLACED

Sir Donald Bradman is the GOAT (Greatest of All Time) of sporting GOATs.  All cricket lovers accept … END_OF_DOCUMENT_TOKEN_TO_BE_REPLACED