Meteorologists define autumn in the UK to be the period from September to November so autumn is now over and we are officially in winter.  The 2018 autumn was consistent with the step change in the autumnal climate that took place in the 1990s.

This clearly shows a shift in our autumnal climate over the last 100 years of roughly 1 standard deviation in some cases.  Recall that the baseline for the z-score calculation is based on the idea of “living memory” which I have defined to be the last 50 years of 1968 to 2017.   We can characterise our autumns broadly as follows:

How many dimensions does Autumn have?

Looking at the 3 scatter plots in turn, we see that the 3 weather variables show little correlation with each other.  For spring & summer, I have said that a statistician would look at the equivalent charts for those seasons and observe that what appears to be 3-dimensional data (temperature, sunshine and rainfall being the 3 dimensions) is in fact closer to be being 2 or 1-dimensional.   If the variables were correlated with each other, it would be possible to create Components using a weighted average of these 3 z-scores, using the method of PCA (Principal Components Analysis) which takes our 3-dimensional data set and calculates 3 new components that are statistically uncorrelated with each other. These 3 components would also have the property that the first component would account for the greatest possible share of the total 3-dimensional variance and thereby reducing the effective dimensionality of the data to 2 or even 1 dimension. 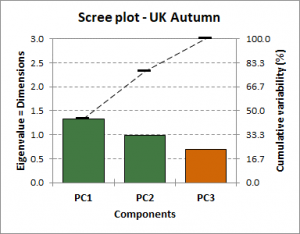 When I carried out PCA for summer data, I was able to obtain a 1st principal component which accounted for 76% of the total 3-dimensional variance.  In other words, our summer weather is effectively 1-dimensional.  This is not the case for our autumns as shown by the scree plot here.  If the 3 weather variables were completely uncorrelated with each other, then each variable should account for 1/3 of the total 3-dimensional variance or 1 dimension.  Our scree plot shows that autumnal weather is not far off that outcome.  PC1 accounts for 44% of the total variance, PC2 accounts for 33% and PC3 accounts for the balance of 23%.  Given the lack of correlation seen in the scatter plots this is not a surprise.

After an entire meteorological year where the temperature above the median for ever single month, … END_OF_DOCUMENT_TOKEN_TO_BE_REPLACED

Sir Donald Bradman is the GOAT (Greatest of All Time) of sporting GOATs.  All cricket lovers accept … END_OF_DOCUMENT_TOKEN_TO_BE_REPLACED