It will be close but I am predicting that the Conservatives will hold onto the West England Combined Authority Metropolitan Mayoralty on 6th May 2021.  By rights, they should not be winning but the 3 parties opposing them do not seem to understand the subtleties of the Supplementary Vote (SV) that is used in this election and they will end up splitting their votes to their detriment.

This will be my first ever forecast of a local election and it’s the combination of the Supplementary Vote system and local conditions that make the West England area different from other areas that use SV for Mayoral elections that motivated me to do it as well as the fact that I live here!  Those who have followed my election forecasting blogs will know that I was deemed 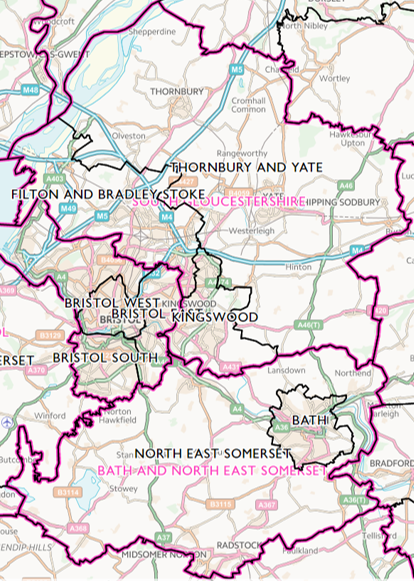 the most accurate forecaster of the 2019 UK General Election beating even John Curtice’s exit poll.  That means the only way forward for me now is downhill …

Update 9th May 2021 – my reflections on the results and how well my forecast did can be found in a series of tweets linked to at the end of this article.

What is the West England Combined Authority?

WECA consists of 3 unitary authorities, B&NES (Bath & North East Somerset), Bristol and S.Gloucs (South Gloucestershire).  In turn each authority maps perfectly to a number of parliamentary constituencies with 2 in B&NES, 4 in Bristol and 3 in S.Gloucs thus giving WECA a total of 9 seats.  As the map shows, the Bristol conurbation is dominant but Bath is by no means overawed.

When WECA was formed, the unitary authority of North Somerset (with 2 parliamentary constituencies) was invited to join but they declined.  Had they done so, this would have resulted in the resurrection of the locally hated Avon County Council.

Update 5th May 2021 – I have since discovered that N.Somerset are in discussions about joining WECA but a political row has prevented this from happening in time for the 2021 elections.

WECA is a politically diverse area.  Since 2010, 6 parties have come first in the vote in seats or authorities across the 4 general elections, 3 EU related elections and 3 local elections where all 3 authorities voted at the same time.

It should be noted that B&NES & S.Gloucs elect the entire council every 4 years (last time in 2019 when the Lib Dems gained B&NES from the Conservatives and the Conservatives retained S.Gloucs).  Bristol now does the same (Labour gained control in 2016 from No Overall Control) and is holding local elections this year (delayed from 2020) but until 2015, elections took place every year with 1/3 of councillors up for election.

In other words, out of 7 elections contested by political parties, WECA has voted for 5 different parties as number 1!

Update 5th May 2021 – I received a Lib Dem leaflet through my letter box stating that they have more councillors in WECA than any other party.  The Lib Dems are known for their dodgy bar charts but this is actually correct for a change!  They have 63 compared to 57 for Conservatives, 53 for Labour (4 have stood down and are vacant), 11 for Green and 6 Independents.  Breakdown across the 3 unitaries are –

Data Sources – my prime source for general & EU elections is the House of Commons Research library sometimes supplemented with data from British Election Survey and the Electoral Commission.  For local elections, I use Wikipedia which usually uses the local authority itself as the original data source.

What happened in the 2017 Metro Mayor Election?

In 2017, the Conservative candidate, Tim Bowles, was elected as the first ever Mayor of WECA under the Supplementary Vote (SV) system

Results are counted for each of the 3 unitary authorities that make up WECA but the decisions on elimination after Round 1, etc only take place at the WECA total level.  That is why in both B&NES & S.Gloucs, the Labour candidate received 2nd preference votes in those authorities even though he was not in the top 2 in those authorities.  The same thing happened to the Conservative candidate who was not in the top 2 in Bristol.  Bristol in fact accounted for half of all votes across WECA.

For transparency, I am a registered voter living in B&NES.  Since I am an Independent Statistician, I do not normally state how I vote.  In this instance, I will state that my 1st preference went to the Independent candidate in 2017 and I correctly predicted that the top 2 candidates would be the Conservative & Labour candidates but I won’t say which one I gave my 2nd preference to.

With that in mind, I have updated the WECA vote shares table shown earlier showing what the 1st round vote shares were among the 160k voters who gave their 1st preferences to the 4 parties standing again in 2021. 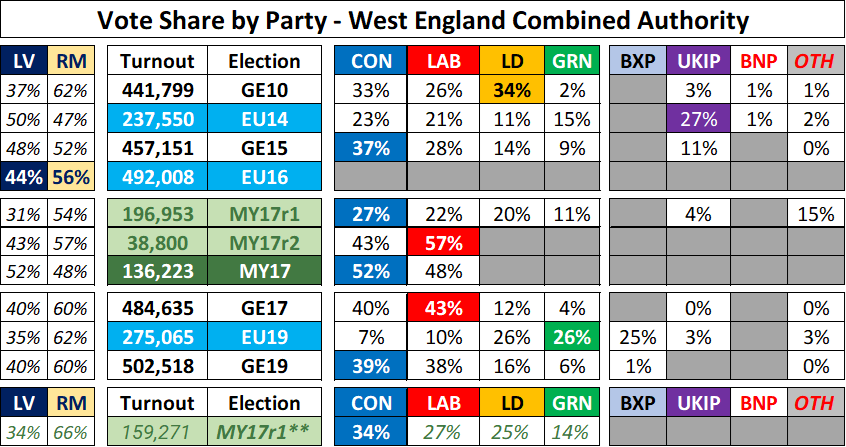 What do the latest polls say?

As far as I am aware, there have not been any polling for this election.  The latest national opinion polls show the Conservatives and Labour at broadly the same level as they were for the 2019 general election, the Liberal Democrats down 4pts and the Greens up 3pts.  If I compare the latest polls with May 2017, the Conservatives are down 4 pts, Labour up 5pts, Lib Dems down 2pts and Greens up 2pts.

It’s hard to say if any of these national poll changes hold any meaning for this election especially since there are only 4 candidates this time compared to 6 last time.  I would say the strongest indication from the polls is that the Green vote nationally is roughly double where it was in 2017 & 2019.

How can the Conservatives lose in 2021?

Given the lack of polling data, the approach I’ve taken to forecasting this election is to work backwards from a Conservative victory in 2021 given they won the last election and ask myself, what would need to change for them to lose the race this time.  Once I know how much things need to change, I can then decide if such changes are likely or unlikely.

I noticed that the % of eliminated votes being reallocated to the top 2 candidates in 2017 was quite consistent over the 3 unitary authorities despite their voting patterns being different.  The figures were –

To demonstrate what needs to happens for the Conservatives to lose, I have created 4 scenarios as shown below, all of which assume the following –

It should be no surprise, the closer Labour is to the Conservatives, the lower the vote share needed in round 2 for them to win.  However, the sensitivity of the relationship between the CON-LAB lead in round 1 and the LAB share in round 2 may be more than you might expect.  That is because of the low proportion (40%) of the eliminated candidates whose 2nd preferences end being included in round 2.  In addition, the higher the combined vote share of the top 2 candidates, the lower the combined vote share of eliminated candidates whose 2nd preferences come into play.  You can see in the 4 scenarios how the total number of votes in round 2 falls as the Labour vote share increases.

Which is the most likely scenario in 2021? 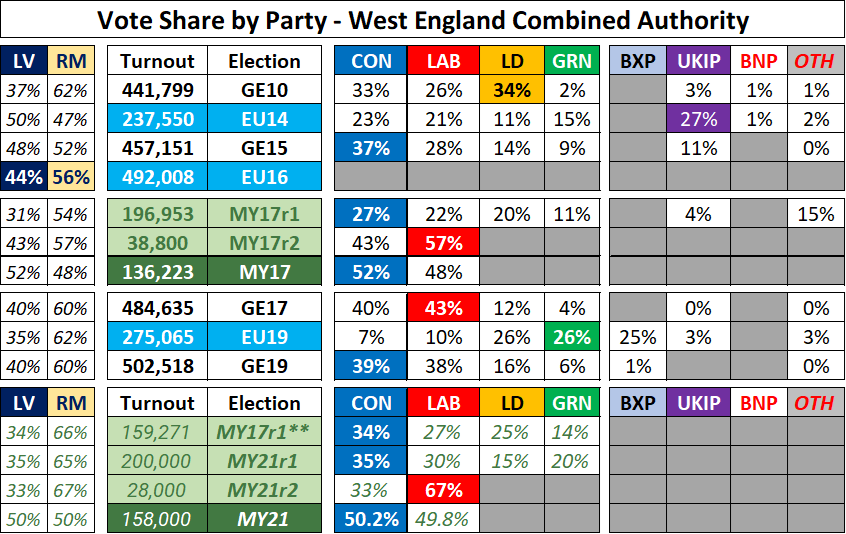 My reasoning for this is as follows.

Why the opposition doesn’t understand SV?

My chosen scenario assumes that Labour will come 2nd.  Do Liberal Democrats & Green voters know this?  Have they been told to give their 2nd preferences to Labour in anticipation of round 2?  If they haven’t then Labour won’t win enough 2nd preferences to win.

Here is the problem with SV in an electoral region where all 4 parties have topped the poll at some point in the past.  It is hard to voters to guess which 2 parties will come top in round 1 and vote their 2nd preferences accordingly.  In areas like the West Midlands or London, voters should know that Labour & Conservatives will be the top 2 parties.  They can then vote for whichever candidate they like best in round 1 and then choose the least worst of Labour & Conservatives for round 2.

It is an axiom under first past the post that vote splitting can cost you the seat.  Under SV, vote splitting continues to cast its shadow in the 2nd preferences when it is unclear which candidate will be in the top 2.  What should have happened here is that if the 3 opposition parties were determined to oust the Conservatives, one of them should have stood down for this election.  Of course, that is easy for me to say and extremely hard for the 3 parties to agree upon.  So yet again, the Conservatives win because the opposition are not taking into account the subtleties of SV.

By now, your head may be spinning as you try to digest all the features of the West England Combined Authority Mayoral Election of 2021 under the Supplementary Vote System so let me summarise the key points.

Labour ended up winning easily so my forecast went down the pan!  A series of tweets here explain why this happened.

Please do leave your comments on this Twitter thread.

If you would like to receive notifications from me of news, articles and offers relating to Elections & Polling, please click here to go to my Newsletter Subscription page and tick the Elections and/or Surveys category and other categories that may be of interest to you.  You will be able to unsubscribe at anytime.

— Read some of my other blog posts on elections —

More posts can be found by clicking on the Elections tab at the top of your screen.

After an entire meteorological year where the temperature above the median for ever single month, … END_OF_DOCUMENT_TOKEN_TO_BE_REPLACED

Sir Donald Bradman is the GOAT (Greatest of All Time) of sporting GOATs.  All cricket lovers accept … END_OF_DOCUMENT_TOKEN_TO_BE_REPLACED