This forecast was updated on 17th May 2017.  The predicted outcome is unchanged from my previous forecast.

For my 4th seat forecast of the 2017 general election, I am heading to the North East which is where I grew up.  A colleague who lives in the Bishop Auckland seat told me that “Labour could put a monkey up as a candidate and it would get elected”.  Since the seat was created in 1885, no Tory has ever won this seat and it has been Labour since 1935.

My first seat forecast was for the CON/LD battleground of Bath in the South West and in that post I describe my 3 forecasting models in some depth so please read that post if you are unfamiliar with these.  However, now that we know the number of candidates in each constituency, I have created an additional model to handle 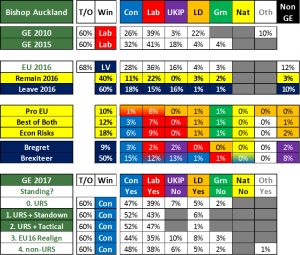 stand downs by parties and in this seat, both UKIP & the Greens are standing down.  In addition, there is a 5th model under development.

I have run these models for Bishop Auckland and all predict a Conservative gain with a clear majority.   This seat is a classic emblem of the EU referendum in 2016, an eternal Labour seat that voted strongly for Leave and exposed the fault lines in the working class vote that historically have been the bedrock of the Labour vote.

The North East & London are the only regions in Britain where Labour still has a lead in the polls albeit narrow ones.  Unfortunately, since 2015, their lead over the Conservatives has shrunk from 21.6% to 4% as shown in the charts below.  Chart R2 is the same information as displayed for the North East in chart R1 of my Opinion Poll Tracker, R3 is the rolling 15 poll median for the North East crossbreaks of all the polls.  The apparent brief Conservative lead shown is the result of a very large poll carried out by Lord Ashcroft at the start of May which showed a large Conservative lead and temporarily distorted my rolling median. 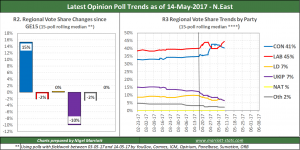 In Bishop Auckland, Labour only had a 9% majority in 2015 so a 17% reduction in this leads to a straight loss of the seat.  A major reason for their smaller majority in 2015 was the rise of the UKIP vote from 3% to 18%.  Chart S2 in my Opinion Poll Tracker shows that nationally, 52% of UKIP15 voters have defected to the Conservatives compared to only 8% of UKIP15 voters defecting to Labour.  It is worth noting though that Chart R2 above appears to indicate that since the election was called some UKIP voters appeared to have switched to Labour but it still seems the majority have switched to the Conservatives.  Of particular interest is what will happen to the remaining UKIP voters given that UKIP has stood down.  As I explained in my North Norfolk forecast, I am expecting these voters to split 70:30 CON:LAB but I am keeping this under review.

In addition to UKIP15 voters, the other large voter segment to watch for are Labour Leavers who I estimate make up 15% of voters in this seat.  Again chart S2 indicates that 11% of LAB15 voters nationally have switched to the Conservatives which equates to about 1/3 of Labour Leavers.  It is worth remembering that Bishop Auckland’s Leave vote of 60% is higher than the North East Leave vote of 58% and if my analysis of a potential non-Uniform Regional Swing in Cardiff South & Penarth is correct, then this could be worth an additional 2% to the Conservatives and 2% less for other parties.

UPDATE 11/5/17 – The day after I wrote this, the BBC did a short piece on whether the Conservatives could win Bishop Auckland!

UK Inflation has risen sharply since the start of 2022 and dominates the media and politics today.  … END_OF_DOCUMENT_TOKEN_TO_BE_REPLACED

Rishi Sunak is the UK's first Prime Minister from a non-white ethnic minority. Did this happen by … END_OF_DOCUMENT_TOKEN_TO_BE_REPLACED

The weather in the UK for October was warmer and sunnier than normal.  Overall we are heading for … END_OF_DOCUMENT_TOKEN_TO_BE_REPLACED

The weather in the UK for September was unremarkable.  Perhaps that is a welcome change after the … END_OF_DOCUMENT_TOKEN_TO_BE_REPLACED

The 2022/23 Women's Super League (WSL) kicks off this weekend in England.  After the Lionesses … END_OF_DOCUMENT_TOKEN_TO_BE_REPLACED