You are here: Home / Polling

The last 3 general elections have seen some significant polling errors.  In 2010, the Lib Dems were significantly overestimated, in 2015 the Conservatives were underestimated and last year saw the largest ever underestimate in the Labour vote.  Whilst these errors suggest that the polling industry is struggling with general elections these days, a natural question to ask is “are all pollsters equally bad or are some better than others?”

END_OF_DOCUMENT_TOKEN_TO_BE_REPLACED

Ahead of the 2017 general election, I predicted that the opinion polls would be wrong again and that the Conservatives lead over Labour would be underestimated by 2.6%.   I based this on data provided by Mark Pack who has systematically recorded every opinion poll published since 1945.  In the event, I was right that the polls would be wrong but instead of an error favouring the Conservatives, the polls recorded the largest ever underestimate of the Labour vote.  As a result, election forecasters were blindsided yet again and the result was a hung parliament which few saw coming.

END_OF_DOCUMENT_TOKEN_TO_BE_REPLACED

This is my last update of the opinion before election day on June 8th.  I will use my analysis of these polls to update my 2017 General Election Seat Predictions and you should read that post in conjunction with this one.

The latest situation is that the Conservatives now only hold a 7% lead over Labour which is down 2% from last week and only just above what they had in 2015.  Labour’s vote share has recovered significantly to narrow the Conservatives lead and Labour are now capable under some scenarios of depriving the Conservatives of a majority.   However, it has now become clear that pollsters are dividing into two groups and I have written a separate post that explores the implications of this and I strongly recommend you read that.  This post reports on all posters combined rather than separate blocs.

END_OF_DOCUMENT_TOKEN_TO_BE_REPLACED

Unlike the 2015 general election when the polls were essentially static (& wrong) throughout the election, the 2017 general election has seen some of the most extraordinary volatility in the polls that I can remember.  If you are a Conservative supporter, the narrowing lead over Labour must be leading to anxiety and changed underwear.  If you are a Labour supporter, you are probably starting to dream “can we? will we?!”  It doesn’t help that your state of mind will depend on which poll you are reading and your memories of the pollsters’ failure in 2015 so how can you make sense of what is going on.  I will show you how in 5 steps and to heighten the drama, I will leave the punchline to the end!

END_OF_DOCUMENT_TOKEN_TO_BE_REPLACED

If you are familiar with my UK Opinion Poll Tracker, you will know that one of my key charts for making predictions of the 2017 General Election is R1 which shows the changes in vote share by region. 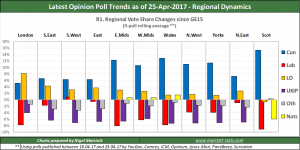 As I have explained, I track the regional breakdowns to produce this chart.  Every now and again, a full on poll takes place to explore a region in more detail and this allows me to check how good chart R1 is.

END_OF_DOCUMENT_TOKEN_TO_BE_REPLACED

The weather in the UK in August 2021 was totally and utterly unremarkable.  Overall, Scotland & … END_OF_DOCUMENT_TOKEN_TO_BE_REPLACED

This article was last updated using data submitted as of 4th September 2021. In February 2021, … END_OF_DOCUMENT_TOKEN_TO_BE_REPLACED