After 12 months of essentially static polls despite the news being dominated by Brexit, Labour has experienced a significant worsening of their position and the Conservatives have opened up a lead over Labour that would give them a majority in parliament.  Words of caution are being uttered about the extent of the Tory lead since one pollster is notably out of step with all other pollsters.

Despite the near constant news of Brexit and the parliamentary votes, the Conservatives appear to be holding steady at 40%.  Labour’s slow downward trend resumed suddenly in February after months of relative stability.  The most notable beneficiary was the Others which now includes The Independent Group (TIG) of MPs who left the Labour and Conservative party in February.  It should be noted that I am using polls that do not explicitly suggest TIG as an option since they are not yet a formal political party.  Polls that do suggest TIG are recording some significant vote shares so if and when TIG becomes a party, expect the Others to gain even more share in this chart. 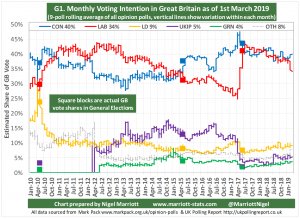 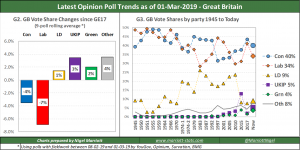 This section takes a closer look at trends over the last 12 months.  My goal is to discern any patterns that could be a portent of the future.

Chart G4 shows daily movements and by eye, I can see 6 distinct periods labelled A, B, C, D, E & F.  The exact dates of these periods are shown in table G6 later.  Chart G5 has also been divided into the same 6 periods and this chart shows the Conservative lead over Labour.  Briefly, the 6 periods can summarised as follows:- 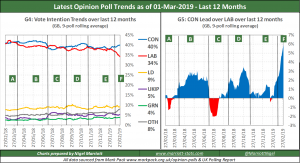 After 12 months of essentially static polls (despite the small movements I can tease out above), February saw a definite move in the polls with 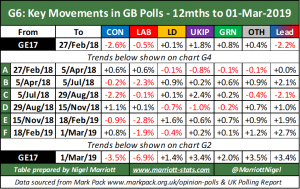 Labour falling sharply and Others making gains.  At the same time, the Conservative party has managed to maintain 40% despite the dominance of Brexit in the news and the various factions at play in Parliament.  As I said back in December, if the Tories can stop Brexit dominating the headlines, I can see them making further gains in the polls.  Labour though appears to be in trouble with a clear downward trend and the obvious question is when will this hit bottom.  History shows this tends to be the high twenties so there is still a way to go.   If this does happen, it will be interesting to see who benefits, TIG, Nationalists, Greens, Lib Dems? 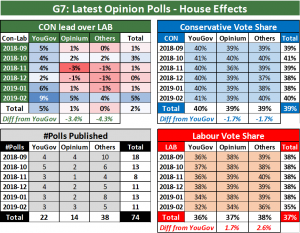 Over the last 6 months, the two most frequent pollsters have been YouGov & Opinium.  It turned out that the other pollsters were very similar so in the graphic to the right, I have lumped all others into Others.  As elsewhere, I have focused on the Conservative lead over Labour and there is no question that YouGov is giving more favourable results to the Conservatives than other pollsters.  Opinium is largely in line with All Others.  Since YouGov is the most frequent pollster, this implies my rolling averages shown in previous charts G1 to G6 could be showing a more favourable picture for the Tories overall.

However, we must be very cautious in drawing a conclusion that YouGov is wrong.  A house effect clearly exists but who is right and who is wrong?  Only an election can answer that question but until then, I prefer to take an average across pollsters rather than favouring any particular pollster.  The question I do need to ask myself is whether YouGov should be downweighted in my 9-poll rolling average since they poll more frequently?  So far I have not done so and I am not yet convinced I need to do so.

For a start, all pollsters are showing the same narrative of a largely stable picture for 5 months and then Labour losing votes in February.  So changing my weights would not change the narrative which is the important bit.  But there is also a subtle statistical reason for being cautious and that is whether pollsters are clones or different from each other.  I will try and illustrate this point with a simplified example.

Suppose YouGov and Opinium are the only pollsters and they each poll once a week.  Then each month, we will have 4 polls from each pollster.  Assume that a house effect exists and we don’t know who to favour, then clearly we would just take an average of the 8 polls.  If for some reason, YouGov decided to poll twice weekly, then the existence of a house effect would justify giving each YouGov poll half the weight of an Opinium poll.

Now suppose Opinium decide to poll once a month instead and 3 new pollsters enter the market also polling once a month.  Let’s assume that the 4 monthly pollsters each do different weeks.  Is this a different situation from my earlier scenario where YouGov & Opinium were the only pollsters and both did it weekly?  The answer depends on whether the 3 new pollsters are effectively clones of Opinium because if they are then there is no justification for saying the situation has changed and you would still take a straight average of the 8 polls.  On the other hand if the 3 new pollsters are not clones and generate their own house effects, then you would have grounds to say “we have 5 pollsters with house effects and one is polling more frequently than the other so downweight that pollster in your rolling average.”

What table G7 is showing is that other pollsters are to all intents and purposes clones of Opinium.  Yes there are more pollsters so perhaps YouGov are the outlier but even though YouGov are the most frequent pollster they still account for a minority of all polls.  As far as I am concerned, downweighting YouGov will not have much impact in any case and I have no evidence that YouGov have fundamentally messed up their polling so for now I will continue with my straight 9-poll rolling average.  I will keep the situation under review though.

After an entire meteorological year where the temperature above the median for ever single month, … END_OF_DOCUMENT_TOKEN_TO_BE_REPLACED

Sir Donald Bradman is the GOAT (Greatest of All Time) of sporting GOATs.  All cricket lovers accept … END_OF_DOCUMENT_TOKEN_TO_BE_REPLACED