Here is a long overdue update of my UK opinion poll tracker and in this post, I going to take a closer look at the key trends over the last 12 months.

The most notable point about chart G1 has been the steady drift downwards for the Labour party following their poll spurt in the immediate aftermath of the 2017 General Election.  The Conservatives on the other hand seem to be fluctuating around 40%. 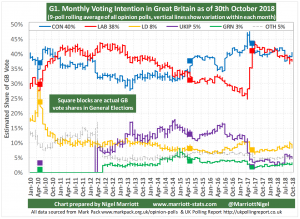 The net effect is that both Labour and Conservatives have lost 3 points since the last election with voters switching to all of the minor parties.. 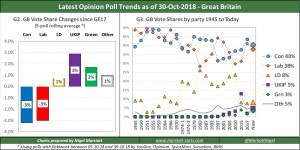 This is a new section for my poll tracker where I take a closer look at trends over the last 12 months.  My goal is to discern any patterns that could be a portent of the future.

Chart G4 shows daily movements and by eye, I can see 5 distinct periods labelled A, B, C, D & E.  The exact dates of these periods are shown in table G6 later.  Chart G5 has also been divided into the same 5 periods and this chart shows the Conservative lead over Labour.  Briefly, the 5 periods can summarised as follows:- 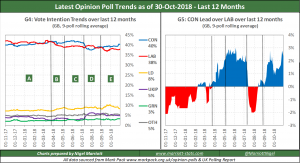 For the Conservatives, the last 12 months is probably as good as they could have expected given the dominance of the Brexit negotiations in the news. 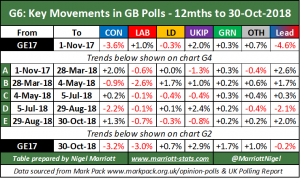 Overall they have basically arrested the slide in their vote that they saw in the 6 months after GE17.  Labour has been on a steady downward drift with notable fallbacks in periods B & E which I associate with the anti-semitism controversies that arose at those points in time.  For the Conservatives, the Chequers deal period D saw their lead briefly eliminated but they have now recovered.

All of the smaller parties have been able to recover some voters since the general election but fundamentally the polls are not greatly changing given all the political events going on.  I would say Labour should be the most concerned as they do now appear to be on a downward drift with the Lib Dems, Greens and Others (mostly Nationalists) picking up the defectors.  Thus we could see the Conservative lead over Labour slowly widen.

After an entire meteorological year where the temperature above the median for ever single month, … END_OF_DOCUMENT_TOKEN_TO_BE_REPLACED

Sir Donald Bradman is the GOAT (Greatest of All Time) of sporting GOATs.  All cricket lovers accept … END_OF_DOCUMENT_TOKEN_TO_BE_REPLACED