My forecast for the 2019 UK General Election this Thursday is that the Conservatives will win a majority of 72 seats.  The margin of error in this forecast is very wide though due to the fact that 5 of of the last 7 general elections have seen a major polling error.  If there is a repeat of the GE2017 underestimate of Labour, then there will be another hung Parliament.

Breakdown of My GE2019 Forecast by Region

I expect the Conservatives to make a net gain of 43 seats which will more or less come from England since their expected gains in Wales will be cancelled by losses in Scotland. 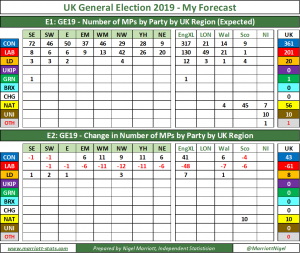 This would be Labour’s worst ever post-WW2 election beating the nadir of 1983.  The so-called “red wall” of the North & Midlands will be decisively breached with seats turning Conservative for the first time ever. 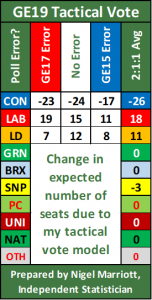 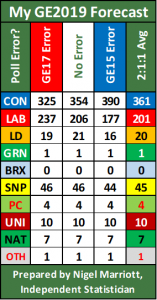 I came up with this weighting method after reviewing why I got my 2017 General Election forecast wrong.

Breakdown of My Forecast by Seat

If you see a seat forecast that doesn’t look right to you then please email me or comment on this Twitter thread.  You will see that the spreadsheet also includes the YouGov MRP seat forecasts as well as any individual polls of seats that have taken place (26 in all).  Like YouGov, I have no intelligence on specific local conditions which might explain why my number could look odd to you.

By the way, I have put all notable independents that I am aware of e.g. Dominic Grieve, under the IGC (Independent Group for Change) label rather than under OTH (Other) label.  I believe IGC (formerly Change UK) are only running 3 candidates but doing it this way made it easier for my spreadsheet to do the calculations.

Which Opinion Polls did I use to make my forecast?

I have been the polls in depth since the summer of this year.  Data from 10 pollsters have been recorded and I have taken the average of these to create these two tables. 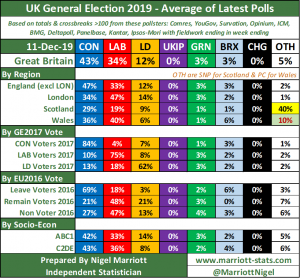 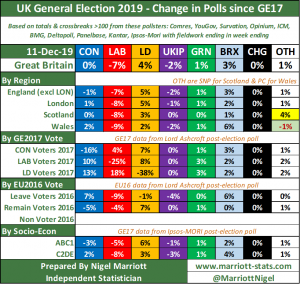 For more details on this data, please read my latest Voting Intention Tracker.

How does my Seat Forecasting Model work?

There are 5 steps to my seat forecast.  Each step uses an abbreviation to denote the model I use.

I describe these models below.

I am using a method I first described for the Peterborough and Brecon & Radnor byelections earlier this year.  From the tables in the previous section summarising the polls, you can see that I have been tracking 4 breakdowns of the electorate.

I decided to build models for each breakdown and then take a dynamic weighted average of these models.  For reasons I explain below, I actually created two BRX and two SEG models so I ended up with 6 models in all.

UPDATE 1500 12th December – due to pressure of time, I have not been able to complete this section.  However if you click on the link above, you will get a good flavour of my method which I largely stuck to.

One of the key insights I had from my forecast error for the 2017 General Election is that I had exactly the right model which was also a NURS (Non-Uniform Regional Swing) model but I had the wrong input data in the form of the polls.  Although it was with the benefit of hindsight, I did have a clue as to the polling error from a chart I had produced before the election.  You will find this chart and the clue it contained about halfway down in my review of my GE2017 forecast.

I am making the assumption that a NURS model will work again.  One of the problems I had with the 2017 election was a dearth of polls for individual seats.  This time, both Survation and Deltapoll have carried out polls in 26 seats, some more than once.  I have developed my NURS model using just these polls but instead of trying to predict the change in the Conservative lead over Labour as I did in 2017, this time I am trying to predict the change in the “Leave Alliance” lead over the “Remain Consortium”.  One poll for the Cambridge seat took place well before the election so I ignored that and used the other 25 seats to produce this chart which pretty much explains everything. 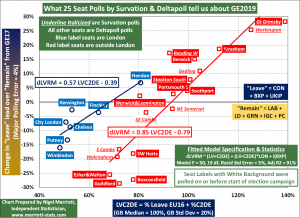 As you can see, my model is able to explain 91% of the change in the “Leave” lead over “Remain” using 3 variables.

The parameters are different for seats in the London region compared to the rest of England & Wales.  Unfortunately there were no seat polls for Scotland during the election so I have assumed that the London model will hold in Scotland since both areas voted Remain in 2016.

This is simply the average of the POLLS & NURS vote shares.

When parties stand down the votes are simply reallocated to fellow parties within the Leave Alliance and Remain Consortium.  The one exception is the Brexit Party where I allocate 2/3 to the Conservatives and 1/3 to Labour.  This is to account for the possibility that the Brexit Party is attracting Labour Leavers who may not decide to vote Tory if the Brexit party is not standing.

Note I do not consider the SNP to be part of the Remain Consortium because of the Scottish Independence angle to politics in Scotland.

UPDATE 1500 12th December – I will update this further when I get a chance!

To see other forecasts I have made, please click on these links.

It was a warm and sunny March this year in the UK.  In fact it was the 2nd sunniest March on record. … END_OF_DOCUMENT_TOKEN_TO_BE_REPLACED