I hope you enjoyed the sunniest May on record!  It was also the second warmest May on record though the Met Office chose to sow confusion by claiming it was the warmest on record.
The meteorological year starts in December which is why December appears as the 1st data point in the charts below.  More information on the layout of the charts can be found in this post.  Points lying between the upper and lower deciles are shown as open black circles, points lying between the decile and minimum/maximum are shown as solid black circles and any month with a new record is shown as solid black squares. 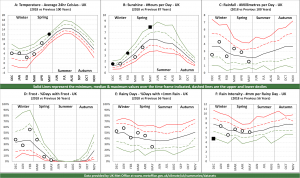 Normally, May sees one hour more sunshine per day than April but we had 4 hours more this time to end up just beating the previous sunniest May of 1989.  At the same time, we had the second warmest May on record just behind the warmest May of 2008.  Note that I use the 24 hour average temperature (12.1 degrees celsius in May) but the Met Office does publish two other statistics.  These are the average daily maximum and the average daily minimum which I do track but I don’t normally report on them.

The Met Office chose to highlight that the average daily maximum temperature across the UK in May was 17.2 degrees celsius which beat the previous highest May figure of 1992.  The average daily minimum temperature was 6.9 degrees celsius which was the 10th warmest on record.  So let’s put the 3 figures together and paint a picture.  The hottest part of the day was the warmest on record, the coldest part of the day was top decile so on average we had the second warmest May on record.  In fact the difference between the maximum and minimum was quite large (1oth largest) but this can be shown to be entirely due to the amount of sunshine which makes sense.  Given that we had the sunniest May on record, it is not surprising that maximum temperatures should have been so high.  In general, during Spring and Summer, sunshine is closely correlated with maximum temperatures but in the winter, there is much less correlation.

Now that Spring is over, it is time to update my regional chart of temperatures.  At the moment, I do not track regional statistics every month but I do track temperature by season. 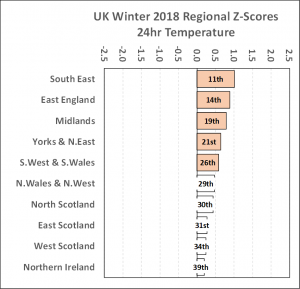 The chart shown here, is the Z-Score for each region for the 2018 winter.  A Z-Score is simply the regional temperature minus the long term average for that region divided by the long term standard deviation for that region.  Doing this, gets around the issue that each region is different on average whereas z-scores all have the same scale, namely number of standard deviations from the mean.

Overall, Spring 2018 was the 28th warmest on record.  This is consistent with the step change in our climate since the 1990s but otherwise unremarkable.  The regional chart shows that for most of England, it was warmer than this but Scotland, Northern Ireland and parts of Wales, it cooler than this.  Unlike the winter this year, I was living in a region (S.West & Wales) entirely representative of the UK.

December marks the start of the 2022 meteorological year and it was very grey, dull and boring. … END_OF_DOCUMENT_TOKEN_TO_BE_REPLACED

Will there be any football this Christmas?  The Omicron variant of COVID19 is wreaking havoc with … END_OF_DOCUMENT_TOKEN_TO_BE_REPLACED