After 3 months of hot, dry and sunny weather, the UK returned to normal in August with a completely unremarkable month. 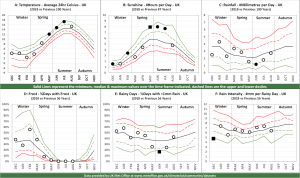 There is nothing of note to say about August but it does mark the end of the meteorological summer and as I explain in my Weather Trends post about the summer, the summer of 2018 has been one of best ever.  However, this was not necessarily the case everywhere in the UK as shown in my regional chart of temperatures below.  At the moment, I do not track regional statistics every month but I do track temperature by season.  The chart shown here, is the Z-Score for each region for the 2018 summer.  A Z-Score is simply the regional temperature minus the long term average for that region divided by the long term standard deviation for that region.  Doing this, gets around the issue that each region is different on average whereas z-scores all have the same scale, namely number of standard deviations from the mean. 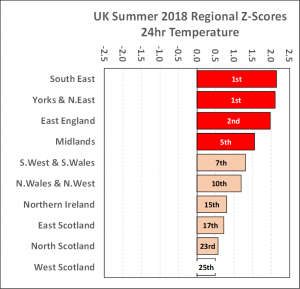 For the UK as a whole, Summer 2018 was the joint hottest on record tying with 2006.  For the South East and North East, it was the hottest summer ever.  Indeed, it appears that the East coast of England was hot throughout but on the west coast, it was hot but not extraordinary.  In Scotland, there may well have been hot spells but overall the summer was not one to get worked up about.

December marks the start of the 2022 meteorological year and it was very grey, dull and boring. … END_OF_DOCUMENT_TOKEN_TO_BE_REPLACED

Will there be any football this Christmas?  The Omicron variant of COVID19 is wreaking havoc with … END_OF_DOCUMENT_TOKEN_TO_BE_REPLACED