The UK is on course for its best summer since 2006 following a hot, dry and bright July.
The meteorological year starts in December which is why December appears as the 1st data point in the charts below.  More information on the layout of the charts can be found in this post.  Points lying between the upper and lower deciles are shown as open black circles, points lying between the deciles and minimum/maximum are shown as solid black circles and any month with a new record is shown as solid black squares. 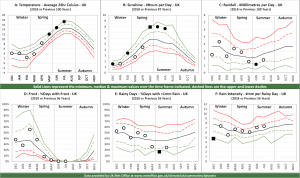 July was another hot (2nd warmest July on record), sunny (6th brightest) and dry (19th driest) and we are on course for our best summer since 2006.  What rain we did have was of normal intensity but the number of rainy days was the 8th fewest on record for July.  My next Weather Trends post will look at the pattern of good summers in the UK and as will become apparent, my prediction that our next good summer would be next year at the earliest has unfortunately taken a bath!

I have now been using the above chart formats for over a year and I am considering some alternative formats.  Below is both the current format and an alternative format for temperature.  Both show the exact same data but do you think the new version is better?

If you work in financial markets, you might recognise the new version as a variant of Japanese Candlesticks.  The horizontal black line is the median, the vertical line is the range from maximum to minimum and the coloured box represents this year’s value.  I chose red if this year is above the median to represent “hotter than normal” and blue if this year is below the median to represent “colder than normal”.  What do you think?  Please feel free to comment on my twitter post.

I will continue to suggest new formats in later posts.  After all, this is a weather tracker post whose purpose is to offer a dashboard that instantly allows you to get a picture of each month’s weather and therefore how the data is displayed is particularly important.

"I mentioned it once but I think I got away with it!" Basil Fawlty didn't get away with it in … END_OF_DOCUMENT_TOKEN_TO_BE_REPLACED

May 2022 was the 5th warmest May on record in the UK.  Whilst temperatures are rising as the days … END_OF_DOCUMENT_TOKEN_TO_BE_REPLACED

Whilst COVID19 was ravaging the world in 2020 & 2021, I felt there was little point in updating … END_OF_DOCUMENT_TOKEN_TO_BE_REPLACED