A sunny October resulted in wide temperature ranges leading to cold nights and the first frosts of the autumn. 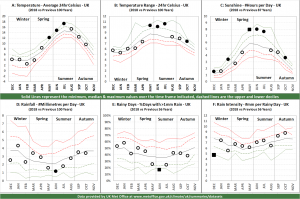 Last month, I added a new chart for the Temperature Range.  Now that I have 7 charts that I update every month, this is an awkward number to fit into the graphic so my intention is to rotate some of the charts around depending on time of year.  Therefore the layout above is different from previous months.  Next month, I expect to drop the Sunshine chart since this is of little interest 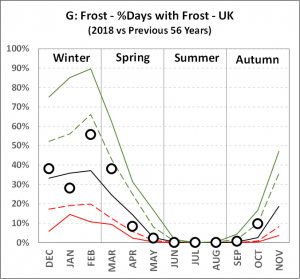 in the winter months and replace it with the Frost chart.  Having said, the 7th chart won’t be lost and as you can see, chart G to the right for this month is the Frost chart.

October was the 5th sunniest on record and the effect was to give our first cold nights of the autumn.  This resulted a wide temperature on average between the minimum and maximum temperature and also some frosty starts to the day.  Otherwise, temperature and rainfall were completely normal for this time of year.

December marks the start of the 2022 meteorological year and it was very grey, dull and boring. … END_OF_DOCUMENT_TOKEN_TO_BE_REPLACED

Will there be any football this Christmas?  The Omicron variant of COVID19 is wreaking havoc with … END_OF_DOCUMENT_TOKEN_TO_BE_REPLACED