April 2019 is the first uninteresting month of the 2019 meteorological year in the UK.  Everybody got excited about the warmest Easter on record but the rest of the month couldn’t be bothered and so dragged the monthly averages down. 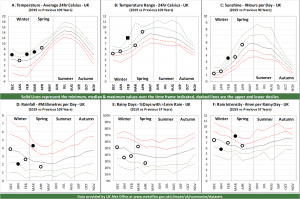 As I explained in October 2018, the addition of a Temperature Range chart (B) means I now have 7 charts to I update every month so I will rotate which 6 appear 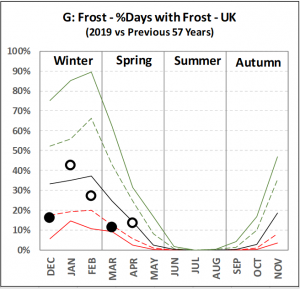 in the deck above and plot the 7th as a separate chart.  I stated that Frost is of least interest in the summer months which means chart C above is for Sunshine and Frost in chart G here.

After an entire meteorological year where the temperature above the median for ever single month, … END_OF_DOCUMENT_TOKEN_TO_BE_REPLACED

Sir Donald Bradman is the GOAT (Greatest of All Time) of sporting GOATs.  All cricket lovers accept … END_OF_DOCUMENT_TOKEN_TO_BE_REPLACED