The Met Office began the month with forecasts of a really cold June and ended the month talking about heatwaves.  This meant June ended up being unremarkable on average. 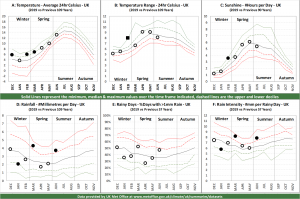 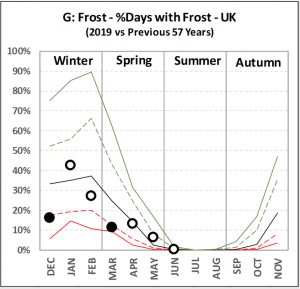 Last month, I introduced chart H which shows a Weather Abnormality index (click for the details of how this is calculated).  The closer to zero this index is, the less abnormal and thus more “average” a month is.  The higher it is, the more abnormal the month is.  When the index is over 100%, we 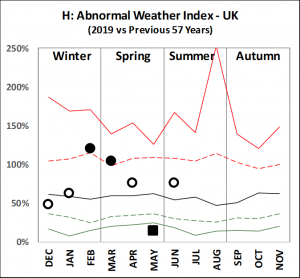 can describe the month as unusual in some way.

It is clear that June 2019 was not abnormal in any meaningful fashion.  It was wetter than normal as can be seen in charts D & F above but temperatures and sunshine were typical overall.

The 2022/23 Women's Super League (WSL) kicks off this weekend in England.  After the Lionesses … END_OF_DOCUMENT_TOKEN_TO_BE_REPLACED

The 2022 UK summer was the 4th warmest & 9th driest on record.  When looked at using principal … END_OF_DOCUMENT_TOKEN_TO_BE_REPLACED

August 2022 was the 4th warmest, 4th sunniest & 10th driest on record.  When looking at average … END_OF_DOCUMENT_TOKEN_TO_BE_REPLACED

UK Inflation has risen sharply since the start of 2022 and dominates the media and politics today.  … END_OF_DOCUMENT_TOKEN_TO_BE_REPLACED

The 5th warmest July on record included a new record temperature of 40.3C on 19th July.  It was also … END_OF_DOCUMENT_TOKEN_TO_BE_REPLACED