The weather in the UK for November 2019 was completely unremarkable in all respects.  It would be nice to have something unusual to report for a change! 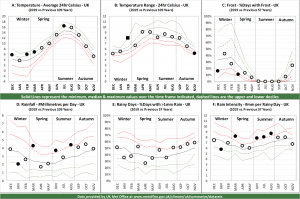 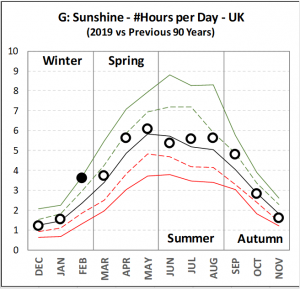 in the deck above and plot the 7th as a separate chart here.  Since it is the end of Autumn, Sunshine (chart G) is shown here since that is of least interest in these months.

How abnormal was November 2019? 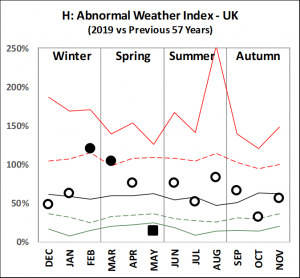 The abnormality index was 56% in October 2019 making the month very very typical.

November marks the end of the meteorological autumn.  I do not track regional statistics every month but I do track temperature by season for each region so 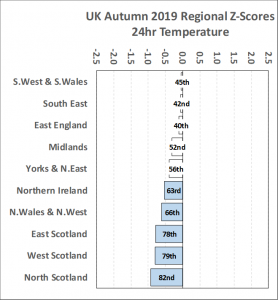 I can update the regional temperature chart below.  This shows the Z-Score for each region for the 2019 autumn.  A Z-Score is simply the regional temperature minus the long term average for that region divided by the long term standard deviation for that region.  Doing this, gets around the issue that each region is different on average whereas z-scores all have the same scale, namely number of standard deviations from the mean.

For the UK as a whole, autumn 2019 was below average in temperature in all regions with Scotland the coldest region of all.

After an entire meteorological year where the temperature above the median for ever single month, … END_OF_DOCUMENT_TOKEN_TO_BE_REPLACED

Sir Donald Bradman is the GOAT (Greatest of All Time) of sporting GOATs.  All cricket lovers accept … END_OF_DOCUMENT_TOKEN_TO_BE_REPLACED